After the January 6 riots in Washington D.C., authorities clamped down hard. The National Guard was called in and fencing was erected around the Capitol.

Some of these safety measures remain in place today, even though the uprising was nearly three full months ago. And Republicans and other lawmakers claim none of this is necessary now.

Sames goes for a Presbyterian minister, who believes the restrictions violate his First Amendment rights.

Rev. Patrick Mahoney has been trying to hold a prayer vigil for Good Friday on the sidewalk by the Lower Western Terrace of the Capitol. It certainly seems innocent enough.

However, authorities denied his request, despite the fact that Mahoney has held similar events in the same location. He even did one last year during the height of the pandemic, with the requisite COVID restrictions.

Now, however, he believes the fencing around the Capitol has created a “no-speech” zone.

And he’s not about to let Washington leaders and other authority figures get away with it. From Fox News:

A Presbyterian minister is suing House Speaker Nancy Pelosi, Vice President Kamala Harris, the U.S. Capitol Police Board, and the Senate Sergeant at Arms, claiming that the continued presence of a fence blocking off the area surrounding the Capitol building is violating his First Amendment rights.

Mahoney’s complaint alleges that the defendants in the case have eliminated “one of the most important public forums in the nation.”

He may have a point, and one wonders if a Black Lives Matter organizer would’ve been denied if they wanted to hold an event of some kind near the Capitol.

All the Reverend wants to do is spread a message of hope and peace, and he believes a Good Friday vigil is critical at this time. It’s difficult to disagree with that sentiment, too.

Mahoney said the vigil is “for the express purpose of beseeching God’s healing from the divisiveness and anxiety lingering over our nation since the tragic events of January 6, 2021.”

The Capitol police denied his request, though, and Mahoney claims this violates the First Amendment. He might have a case, too, so Democrats like Pelosi and Harris should take it seriously.

The longer the Capitol remains off-limits, the more people might start pushing back.

On top of that, Conservatives continue to claim it’s all political theater, as Democrats simply want the restrictions in place to cast the Republican party in a bad light for the Jan. 6 riots.

We’ll have to see how Mahoney’s lawsuit proceeds, because it could have far-reaching implications in the ongoing battle for Freedom of Speech and Freedom of Religion.

This coin is a symbol of President Trump’s victory and success. This item sells for $39.95 on Amazon. Today’s special promotion is offering a massive discount on this item. President Trump 2020 Coin (Gold & Silver Plated) – Claim 1 Free OR Claim a Discount + Free Shipping  Get Your Coin HERE Or Click on the image below. 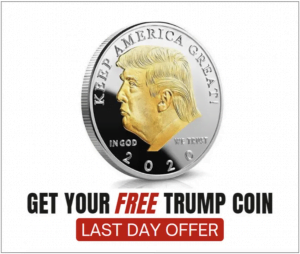