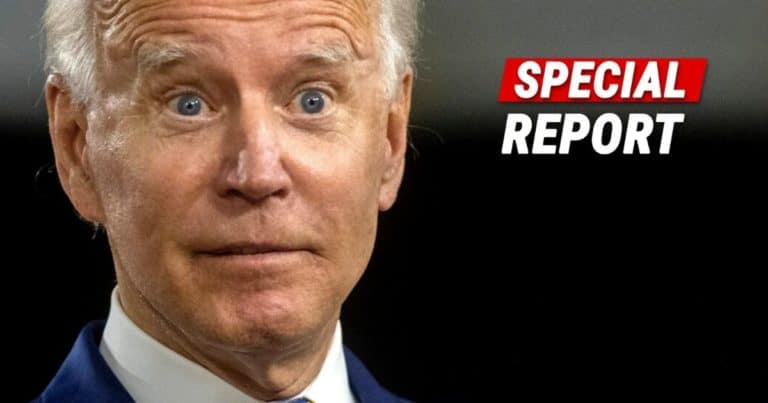 We gotta hand it to Joe Biden’s handlers. They mostly know how to control what the man says.

For last night’s CNN town hall, I’m sure they coached him on every last question being raised. But even they couldn’t stop Biden from being Biden.

And a few shocking remarks came out, regardless.

Sleepy Joe knows he can’t openly go after our military or police (he lets the radicals in his party do that). But during last night’s event, he let slip what he apparently really thinks about our servicemen.

He accused them of something many will think is awful. From Western Journal:

“And the most dangerous people in America continue to exist. That is the greatest threat to terror in America: domestic terror.”

In keeping with the left’s ongoing offensive against American citizens who don’t atgree with them, Biden claimed that America’s greatest threat is our own people in America.

Despite any hard numbers backing his claim, Joe claimed that former cops and military are now fueling the “growth” of this supposed movement.

Go outside for a minute and take a look around. Chances are, there are few people in your community that would back the radical views of that group. Now, how many BLM or Antifa banners do you see?

If you are at least a few miles outside of a major city, you’ll know which groups are really active. And which group is just a boogeyman used by the left.

Americans were quickly disgusted by Joe Biden’s attack on our men and women in uniform. Police officers and military dedicate their lives to serving the public. They literally put their lives on the line to protect us.

But the best they can get from Joe is a wild and unprovable accusation.

And what does he really mean by saying this? Does Joe intend to go after veterans and retired cops? Is this to justify all those National Guardsmen still stationed in D.C.?

We know that his Secretary of Defense wants to “purge” the military of supposed racists. Are we to expect Biden will go after private citizens next?

Can former cops and military expect the federal government to come knocking on their doors? And then what? Anyone with a “Back the Blue” flag in their front yard?

It might seem extreme, but what Joe is saying is pretty extreme itself.