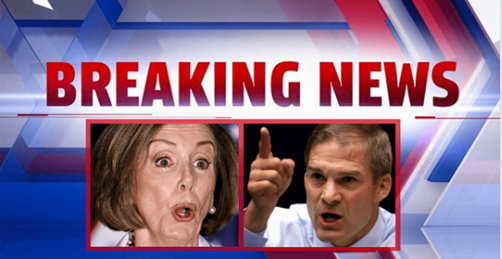 It’s been a bad week for Nancy Pelosi. First, she insulted Americans during Hairgate, now this.

Not only did she impeach the president over a phone call, but she did something very insulting—before the whole country.

Now, the GOP is calling on Attorney General Barr to investigate this shocking act:

Republican Policy Committee Chairman Gary Palmer, R-Ala., and Republican Study Committee Chairman Mike Johnson, R-La., wrote a letter to Barr on Tuesday asking he deliver a definitive answer on whether “Pelosi committed a criminal act by destroying an official copy of the State of the Union speech delivered to her” by Trump.

Republican leaders are asking Attorney General Barr to look into whether or not Pelosi broke the law when she tore up Trump’s SOTU address.

Millions of Americans were disgusted when Pelosi tor

e up a speech that honored veterans, celebrated American heroes, and promised a better future for the country.

Some even spotted her testing ripping the speech, while Trump was giving it.

This has led some to believe she had planned to do it all along, regardless of what Trump said.

According to these GOP leaders, destroying an official copy of a State of the Union speech was a “criminal act.”

There are laws that forbid the destruction of government documents, especially ones of historical significance. A State of the Union address would be considered historical by anyone.

So, did Pelosi really break the law? Will Barr look into this situation?

But even if she doesn’t get charged, Pelosi disgraced the office of the Speaker with her pathetic act.

Instead of forging a path for unity, she tore up a president’s speech. In a way, it was a symbolic omen for how Democrats tried to tear this country apart—through lockdowns and riots.