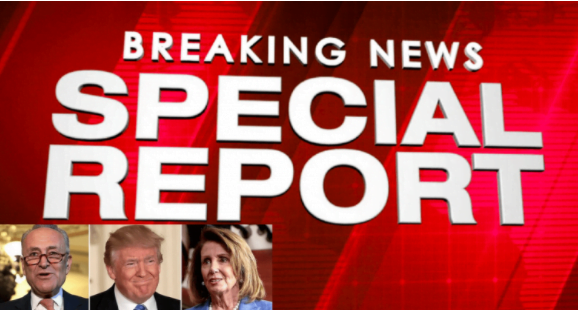 Nancy and Chuck couldn’t wait – but we found their plan!

This bogus impeachment is a black stain, but not on our president.

Democrats who want to remove our duly-elected president will be forever shamed over their scheme.

Without strong evidence, bipartisan support, or the will of the people, they pushed through their impeachment articles.

All so that their 2020 candidate would have a better shot at winning the election.

Impeachment moves to the Senate, where they will eventually vote to convict or acquit the president.

But before the Senate can even do their job, Democrats are seeking to undermine them.

Facing almost certain failure in any Senate trial to impeach President Donald Trump, Democrats in Congress are already doing their best to lay the groundwork to undermine the constitutional process they themselves set in motion…

“I think we’re going to have to call for a mistrial before it ever gets over to the Senate,” California Democratic Rep. Jackie Speier told CNN correspondent Jake Tapper on Tuesday.

In other words, they know they’re going to lose but don’t want Americans to trust the verdict.

Democrats in the House are already talking about calling for a mistrial in the Senate—before they even hold the trial!

This is how desperate and pathetic their scheme really is. If they cared about our Constitution and protecting our democracy, they’d wait for the Senate to hold their trial.

Instead, they are already scheming to prevent McConnell and the rest of the Senate from following the law.

Hey, this shouldn’t surprise us. House Democrats barrelled through their impeachment inquiry. They held secret meetings to hide the facts.

They reject any objections and concerns by Republicans. They pushed forward with their vote, even as America turned against impeachment.

Why wouldn’t they try to interfere with Senate’s lawful right to hold a trial?

When this case moves to the Senate, the president will finally get to defend himself. The truth of real government corruption will come out for the world to see.

Republicans will be allowed to actually take part and have their say. Democrats really hate that.

In the end, this isn’t going to hurt the president. But Democrats will regret ever saying the words “impeachment.”

SHARE if you are finished with Democrats and are ready to give Trump a 2020 landslide!