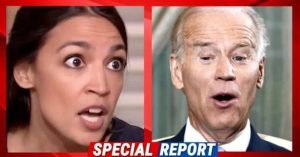 If Biden thought he’d get the full support of a Democratic Congress, he better think again.

He’s not even in office yet and Complainer in Chief, AOC, is already bothering him.

Biden released his budget proposal, which will cost taxpayers $1.9 trillion. Along with that, Biden seems to be dangling more relief checks over Americans’ heads.

That should be enough to get a socialist like AOC on his side, right? Not quite.

Why Are We Doing This?

Donald J Trump has shown he is the most successful President in recent history. Through constant Liberal attacks, accusations, and trials he has shown the strength to push forward and succeed for America. A booming economy, lowest unemployment rates, and great foreign relationships show that Trump is changing our nation for the better.
We want to give you something to remember this great President, that can be passed down through generations. Collect this limited edition coin as a symbol of the man that made American great again!

In a follow up tweet, Ocasio-Cortez argued that Congress should provide retroactive unemployment relief, in addition to the $400 per week that Biden included in his latest proposal. Biden’s proposal also expanded from $500 to $1,500 the Earned Income Tax Credit.

Now, considering AOC’s idea of “support” includes guaranteed income to people who refuse to work, we’ll take her complaints with a grain of salt.

Biden’s plan will “fix” the arguing over the initial $2000 payments that turned into $600. But AOC wants retroactive unemployment, as well as other goodies for her constituents.

This is pretty consistent with AOC, who feels that being an entitled Millennial lets her criticize everyone in her party.

It’s hard to imagine she has any allies left, besides from her “squad” who is as out-of-touch with reality than she is.

AOC entered politics after failing in the private sector. She has consistently shown she knows little about economics and government. And she fails to show respect to her own party leaders, including Joe Biden, Nancy Pelosi, and Chuck Schumer.

But despite all that, these old battle axes have refused to rein her in. They keep giving ground to radical socialists like AOC, who prove they have big mouths and little brains.