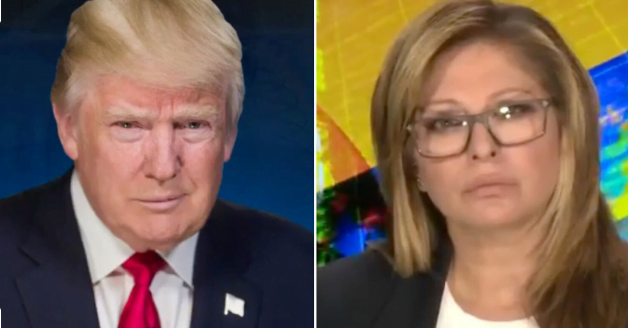 Trump joined “Sunday Morning Futures” by phone, where he ranted about the election results and pushed unsubstantiated allegations of ballot-counting irregularities and a “rigged” election in favor of President-elect Joe Biden.

Host Maria Bartiromo, one of Trump’s most fawning cable news allies, mostly sat back and let the president peddle baseless conspiracy theories to her hundreds of thousands of viewers. When she did chime in, it was to encourage his defiance and sow doubt about the electoral process.

Trump whines at length that the DOJ and FBI aren't doing more to help him overturn his loss to Biden pic.twitter.com/7Ik0NiB7lO

“This is disgusting and we cannot allow America’s election to be corrupted,” Bartiromo said after Trump whined that the Justice Department is “missing in action” when it comes to investigating his voter fraud claims.

Election officials across the country ― Republicans and Democrats alike ― as well as international election observers have declared the 2020 presidential election to have been free and fair and without widespread issues.

Trump’s exchange with Bartiromo followed months of the president bashing Fox News for being too tough on him at times. He has encouraged his supporters to tune in instead to far-right outlets like One America News and Newsmax, which often parrot his nonsensical claims.

In his rambling interview, in which Bartiromo peppered in a few softball questions, Trump repeatedly lied that Republican poll watchers were not allowed near the vote-counting process in “just about all of the states.”

Though the Trump campaign’s legal team, headed by Rudy Giuliani, has made this claim in public numerous times, it has shied away from the assertion in the courtroom. In one case, a campaign lawyer admitted to a federal judge in Pennsylvania that Trump had a “nonzero number” of people present in Philadelphia during ballot-counting.

Trump also claimed Sunday that world leaders have been calling him to congratulate him on his win (he didn’t win) and telling him “that’s the most messed up election I’ve ever seen.”

In fact, as CNN pointed out, nearly every major U.S. ally has called Biden to congratulate him, including Israeli Prime Minister Benjamin Netanyahu and U.K. Prime Minister Boris Johnson.

What’s more, the White House hasn’t released any phone calls between Trump and a foreign leader since the end of October.

Bartiromo asked Trump several times to lay out what specific evidence his legal team will present in court to overturn Biden’s win. But Trump continued to offer vague allegations instead.

“We’re trying to put the evidence in and the judges won’t allow us to do it,” Trump lied. “We have so much evidence.”

He then took aim at Georgia Gov. Brian Kemp, a Republican, for not doing more to stop the certification of election results in the state, where Biden won by a razor-thin margin.

“I’m ashamed that I endorsed him,” Trump said.

The president wrapped up his interview by complaining that his administration’s COVID-19 response isn’t getting high enough marks in the press.

“I came up with vaccines,” Trump claimed, adding that the U.S. is “doing better than the rest of the world” when it comes to the pandemic.

As of Sunday, the U.S. continued to lead the world in reported COVID-19 infections and deaths. More than 13.2 million cases have been recorded nationwide with at least 266,000 deaths, according to data compiled by Johns Hopkins University.