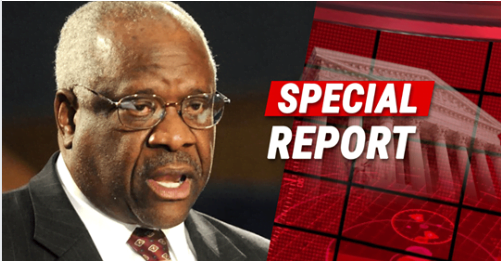 CNN’s Kaitlan Collins inaccurately claimed on Monday that Justice Clarence Thomas had been accused of sexual assault during his nomination hearings in late 1991. Her CNN colleague Kate Bolduan further neglected to correct the false statement.

Collins said, “As President Trump was saying that this shows that you are still innocent until proven guilty. Clarence Thomas was seen clapping in the room. I don’t know if any of the other justices were, but Clarence Thomas, who of course, during his confirmation hearings was also accused of sexual assault, was there clapping, as well.”

A September-published article at CNN — ostensibly a timeline of the FBI’s investigation of Anita Hill’s allegations against Thomas in 1991 — makes no mention of “assault,” “physical,” “threat,” or “violence” in reference to Thomas. It notes that Thomas was accused of sexual harassment.

The New York Times published a similar reminiscence in September, making no mention of “sexual assault” — or physicality of any kind — in describing allegations made against Thomas.

Hill’s accusations against Thomas were advanced by Joe Biden — then a senator from Delaware and chair of the Senate Judiciary Committee — as cause to oppose Thomas’s confirmation. Biden voted against confirming Thomas, who was confirmed with a majority of 52 to 48 in the Senate.

CNN markets itself as a politically objective and non-partisan news media outlet, previously branding itself “The Most Trusted Name In News.” Its’ current slogan is “Facts First.”