DOCUMENT: SWORN AFFIDAVIT EYEWITNESS OF MAN SCAN SAME BALLOTS AT LEAST FIVE TIMES, 50 BOXES AT 4AM, AND OTHER IRREGULARITIES 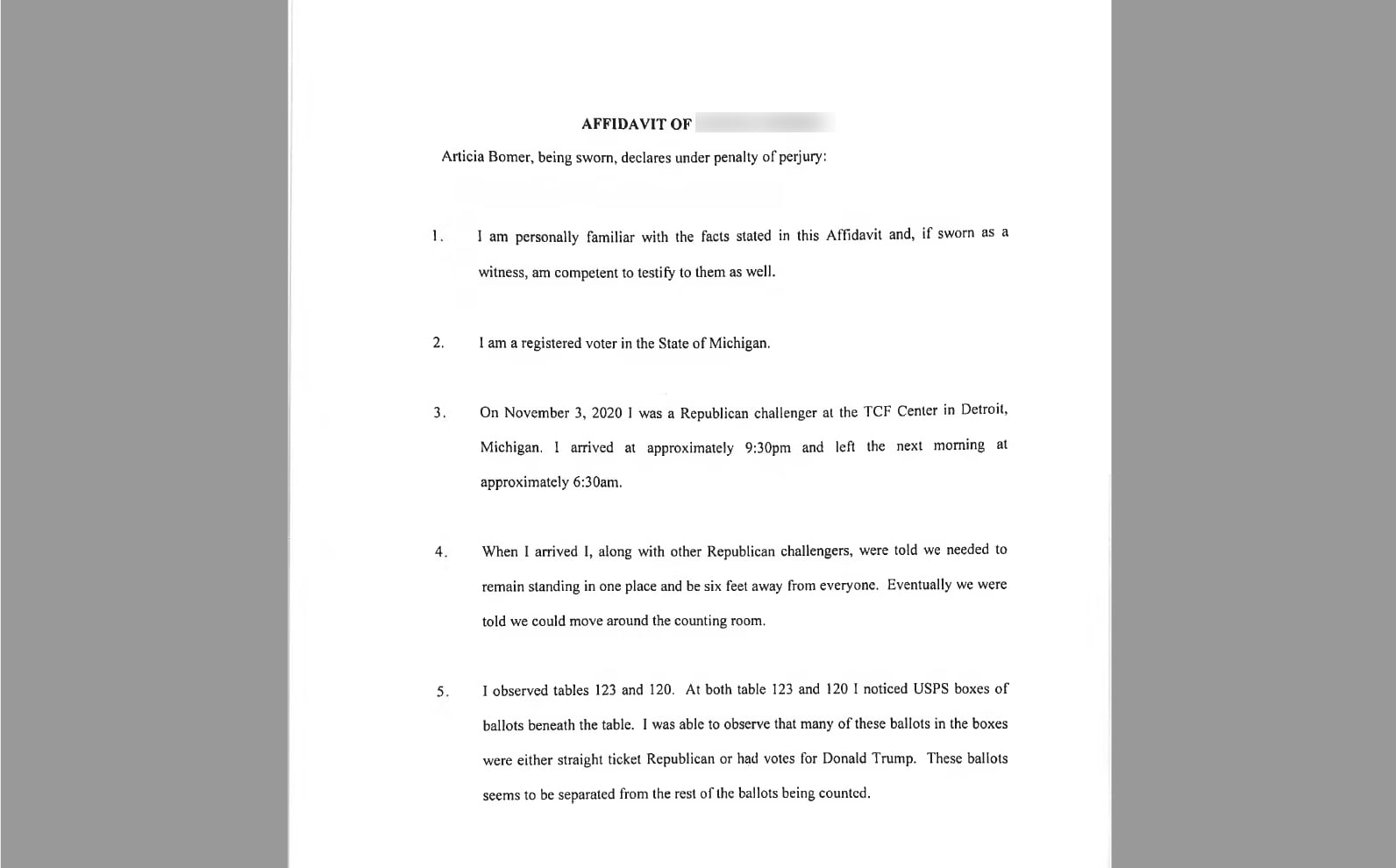 The media who lied to the American people for four years would like them all to believe we can trust them this time. Well, we can’t. That ship has long sailed. The Trump administration filed suit against Michigan on November 11th, 2020. Included in that suit were copies of sworn affidavits MADE PUBLIC from American citizens who swore to witnessing a wide variety of election frauds under perjury or penalty of the law.

My goal is to transcribe and publish these affidavits to the best of my ability. I apologize in advance for any spelling or grammatical errors. I am also including a cover photo, page number, and direct link to the PDF file disclosed by the Trump administration. This will allow you to read the affidavit directly.

1. I am personally familiar with the facts stated in this Affidavit and, if sword as a witness, am competent to testify to them as well.

2. I am a registered voter in the State of Michigan.

4. When I arrived I, along with other Republican challengers, were told we needed to remain standing in one place and be six feet away from everyone. Eventually we were told we could move around the counting room.

7. I witnessed a meeting between election worker “team leads” where they gathered together and spoke, this meeting ended in a cheer. Many of these team leads wore mask or other materials supporting “Black Lives Matter” or other political causes.

8. I witnessed election workers open ballots with Donald Trump votes and respond by rolling their eyes and showing it to other poll workers. I believe some of these ballots may not have been properly counted.

9. I observed a station where election workers were working on scanned ballots that had issues that needed to be manually corrected. I believe some of these workers were changing votes for Donald Trump and other Republican candidates.

11. At approximately 4:03am a poll worker announced that 50 boxes of ballots were coming in. Election workers loudly cheered at this announcement.

12. At approximately 4:50am I witnessed a man spraying a chemical on a ballot counting machine. He then placed twenty-seven ballots into the machine and I noticed tape on the top of the ballot where a ballot number would normally be. Throughout the night I witnessed him insert these same 27 ballots at least five times.

13. At approximately 5:15am an announcement came in for counters to clean their tables. Ballots were still throughout the counting room.

14. In between the announcing at 4:03am of 50 new boxes and the announcement at 5:15am for workers to clean their tables, I did not observe the 50 new boxes coming in or counted.

15. There were no “bag checks” for anyone taking or bringing ballots into the TCF Center.

17. I took notes documenting these issues while I was at the TCF Center