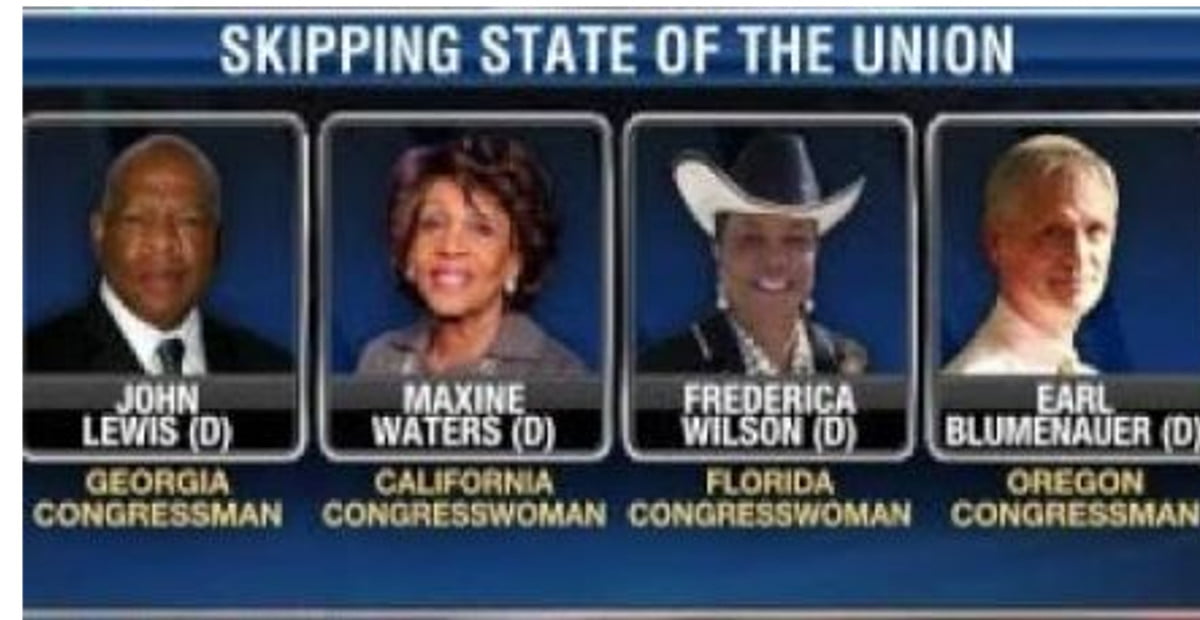 It’s President Trump’s first State of the Union address – but not all lawmakers are planning to attend.

Some Democrats have announced they will protest the event; some plan to wear black in honor of the Me Too movement against sexual misconduct.

And still others, like those listed below, plan to boycott the Jan. 30 State of the Union altogether.

Rep. Earl Blumenauer, D-Ore., said he will stay home during the State of the Union – just like he did during Trump’s inauguration.

“Hearing from Oregonians and working together to protect our values and advance policies that actually strengthen our communities is a more productive use of my time,” Blumenauer said in a statement.

In a Twitter video, Rep. Pramila Jayapal, D-Wash., announced on Martin Luther King Jr. Day that she will not attend the State of the Union. Instead, Jayapal said, those boycotting the remarks will hold their own “State of the Union.”

ANNOUNCEMENT: With all the racism coming from the White House, I will NOT be attending @realDonaldTrump's State of the Union.

Instead, we'll focus on the State of OUR Union, our opposition to his agenda, and we will lift up a progressive and inclusive vision of our country. pic.twitter.com/dcAWMIkZZV

“I think it is absolutely unacceptable to see the racism and hatred coming out of the White House, the way in which this president is fueling the flames of divisiveness across the country,” she said.

Rep. Barbara Lee, D-Calif., will not be attending the State of the Union, her press secretary, Tasion Kwamilele, told KQED.

Citing Trump’s comments about “s–thole” countries, Rep. John Lewis, D-Ga., said he will not go to the State of the Union.

“I cannot in all good conscience be in a room with what he has said about so many Americans. I just cannot do it. I wouldn’t be honest with myself,” he told MSNBC. “I don’t appreciate him, and I wouldn’t waste my time sitting in that House listening to what he has to say.”

Rep. Gregory Meeks, D-N.Y., said Trump “does not respect [him].” Therefore, he will also skip the State of the Union.

“At every opportunity, he’s disrespected me and individuals who look like me. I cannot respect him,” Meeks told MSNBC’s “Politics Nation.”

I just announced on #PoliticsNation that I will NOT attend the State of the Union. Instead, I’ll monitor this President from my office. His current comments about black unemployment, which remains unacceptably high, is just another sign that he doesn’t get it.

Rep. Jan Schakowsky, D-Ill., said she will also boycott the State of the Union.

“I refuse to normalize President Donald Trump and his loathsome language and actions,” Schakowsky said in a statement Friday. “The American people have been subjected to a year of racist, erratic, and divisive behavior from their Commander in Chief, and I refuse to accept that as the new normal.”

This isn’t the first Trump event Schakowsky has chosen not to attend. The congresswoman also skipped Trump’s inauguration, the Chicago Tribune reported.

Don’t expect to see Rep. Albio Sires, D-N.J., at the State of the Union, either.

“The congressman is not attending the State of the Union because many of his constituents are offended by the president’s rhetoric and behavior,” Sires’ spokeswoman, Erica Daughtrey, told NJ.com.

Calling Trump a “liar,” Rep. Maxine Waters, D-Calif., said the president “does not deserve [her] attention,” and she will not attend the speech.

“What does he have to say that I would be interested in?” Waters asked during an interview with MSNBC.

Trump’s State of the Union address will be the first Rep. Frederica Wilson, D-Fla., will not attend as a congresswoman, she said in a statement.

“I have no doubt that instead of delivering a message of inclusivity and an agenda that benefits all Americans, President Trump’s address will be full of innuendo, empty promises, and lies,” Wilson said.

“It would be an embarrassment to be seen with him at a forum that under any other president would be an honor to attend,” she added.

Wilson explained her decision to skip the State of the Union during an interview with CNNMonday.

“To go would be to honor the president and I don’t think he deserves to be honored at this time, after being so hateful towards black people and then black countries,” Wilson said.