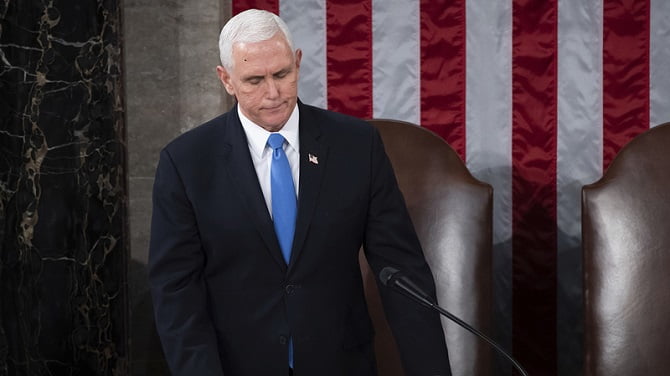 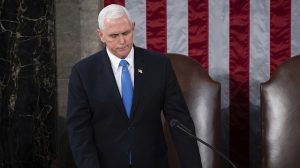 Vice President Mike Pence on Wednesday said that he doesn’t believe he has the “unilateral authority” to decide between competing slates of electors.

“It is my considered judgment that my oath to support and defend the Constitution constrains me from claiming unilateral authority to determine which electoral votes should be counted and which should not,” Pence said in a statement released just before a joint session of Congress began.

As president of the Senate, Pence is presiding over the session. The purpose of the session is to count electoral votes.

Under the Electoral College system, voters choose electors. Those electors then vote, almost always for the candidate that received the most ballots in their state. Congress meets in the January after an election to tally the votes.

Typically a rote affair, this session has taken on heightened significance after seven states sent two certificates to Washington, one for Democratic presidential nominee Joe Biden and one for President Donald Trump. Biden won the states but Trump has said he was cheated.

Trump and some Republicans argue that Pence has the “exclusive authority” to reject electoral votes for Biden and choose the ones for Trump. A lawsuit asking a court to support that view was rejected by a district judge. An appeal was dismissed, though the plaintiffs earlier Wednesday asked the Supreme Court to intervene.

Trump has repeatedly called on Pence to act. If Pence “comes through for us, we will win the Presidency,” Trump asserted in a tweet early Wednesday. He also said his vice president could send electoral results back to state legislatures.

Pence, though, described his role as presiding officer as “largely ceremonial.”

But he noted that members of Congress can act by objecting to electoral votes. Over 100 Republicans plan to do so. They will contest at least three states, with the hope that a senator supports challenges to another three or four. Objections require signatures from a senator and a representative. They trigger a two-hour debate and a vote; a simple majority of each chamber would uphold an objection.

“Given the voting irregularities that took place in our November elections and the disregard of state election statutes by some officials, I welcome the efforts of Senate and House members who have stepped forward to use their authority under the law to raise objections and present evidence,” Pence said.

He said he’d make sure that objections that meet the requirements “are given proper consideration” and criticized people who have described objections as improper or undemocratic, accusing them of ignoring “more than 130 years of history” and pointing out that Democrats raised objections in Congress the last three times a Republican candidate for president prevailed.