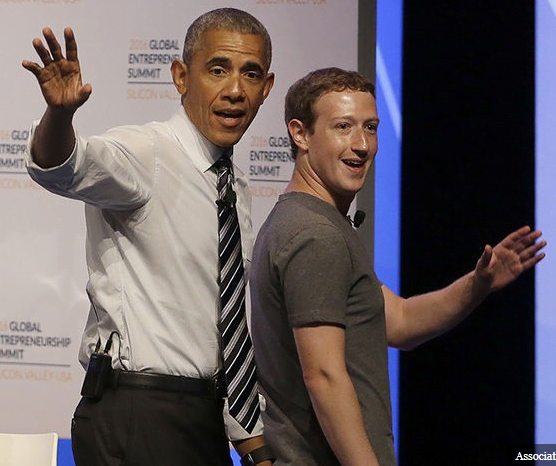 ACRONYM, the technology firm behind Shadow Inc. and the Democratic Iowa caucus disaster, is more than just a wonkish outfit churning out code for political clients. By many accounts, the secretive organization served as a power nexus that connected party elites including Barack Obama, Facebook CEO Mark Zuckerberg, and Hillary Clinton.

As the fiasco surrounding the Iowa caucuses continues to unravel, the malfunctioning app that caused the delay in the reporting of Monday’s results has taken center stage. The secretive firm pulling the strings has also been yanked into the spotlight against its will as evidence mounts that its leaders were biased against presidential hopeful Bernie Sanders.

Shadow created the notorious app that was supposed to collect and report caucus results throughout Iowa this week. But the software proved to be a dud on Monday, when its reporting capabilities broke down due to a “coding issue,” creating a national embarrassment for Democrats.

As recently noted by author Matt Stoller, ACRONYM’s mission extend far beyond the world of technology. The organization essentially functions as a vehicle for large Democratic donors to mobilize their resources against President Trump. The non-profit also served as a glorified digital ad buying service for progressive and liberal candidates.

Among its key players is David Plouffe, a board member who served as campaign manager for Barack Obama. Plouffe currently serves as the head of policy and advocacy for the Chan Zuckerberg Initiative, the charitable outfit of Mark Zuckerberg.

“Plouffe unlocks the trust of the entire Democratic operative class, meaning that Acronym’s technology is being used not just by the Iowa Democrats, but by Nevada Democrats, and a host of campaigns, unions, and nonprofits,” Stoller wrote.

ACRONYM has ties to other Democratic establishment figures. CEO Tara McGowan is married to Michael Halle, a senior strategist with the Pete Buttigieg campaign, according to the Intercept. On Monday, Buttigieg declared victory in the caucuses before official results had been released.

By early Thursday afternoon, Sen. Bernie Sanders had edged out Buttigieg in Iowa, according to caucus results.

McGowan had kept relatively quiet in the hours immediately following the Iowa fiasco. But on Wednesday, she struck a note of contrition in an interview with Axios.

She told the online news site that the Shadow team “made an enormous mistake that has dire consequences in this election and so we want to own that.” But she said that she stands by Shadow’s efforts to help push the Democratic Party to innovate.

“The space was ripe for disruption and innovation. Yet with the ethos of taking great risks means that we can make great mistakes,” she told Axios.

Her words stand in stark contrast to ACRONYM’s earlier statement claiming that the organization was merely one of several investors in Shadow. The attempt to distance itself from Shadow didn’t convince many in the media. The Intercept even reported that the two groups share office space in Denver, Colorado.

McGowan has tweeted dismissively of Sen. Sanders, writing in 2017 that “Bernie is not the answer.” The Intercept reported earlier this week that high-ranking ACRONYM personnel regularly expressed hostility about Sanders’s followers.

i'm not here to revisit our primary fights. we both lost. we all lost. bernie is not the answer. we are. stop dividing us.

A columnist for the New Yorker wrote Thursday that he doubts any nefarious intentions on the part of Shadow, but added that the appearance of a conflict of interest was still enough to inflict damage on Democrats.

“I find it hard to believe that Shadow would intentionally botch such a high-visibility project, perhaps permanently damaging several of its employees’ reputations in the process,” Andrew Marantz wrote in the magazine.

“But the appearance of impropriety is all that’s needed, especially on the Internet, for many people to take refuge in the shadows of distrust; and widespread trust in the basic mechanisms of our democracy, insofar as this trust still exists, is one of the few forces holding the country together.”