Celebrities Host Anti-Trump ‘People’s State of the Union’: ‘This Is the Heart of Patriotism’ 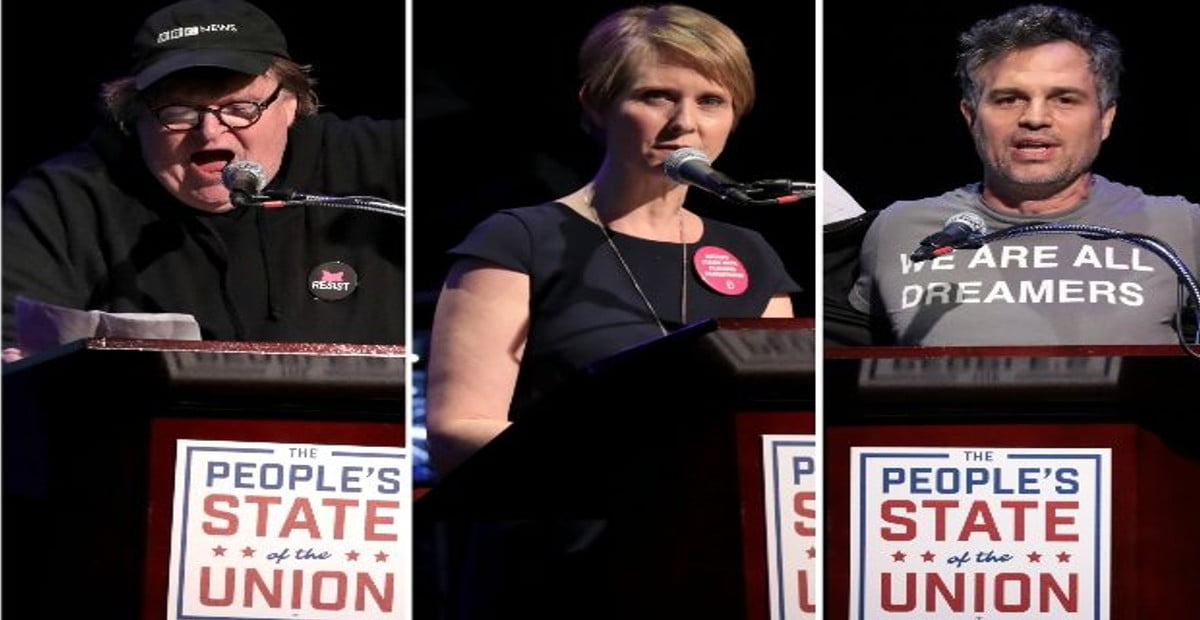 Celebrities and activists gathered in New York City Monday night for the star-studded “People’s State of the Union,” a public rally meant to serve as counter-programming to President Donald Trump’s first State of the Union address on Tuesday.

Other speakers included immigration activists and other members of the anti-Trump “Resistance” movement, many of whom wore T-shirts with the phrase, “We are all Dreamers.”

Ruffalo, a frequent and outspoken critic of the Trump administration, served as the night’s de facto emcee.

“We’re going to set our sights to continue that work in the next year, and strengthen our bonds and commitments to each other, for long after the Trump era comes to its rightful end,” said Ruffalo. “We ain’t stopping with Trump, okay?”

Moore, who released an anti-Trump documentary during the 2016 campaign and later mounted an anti-Trump Broadway play, worked himself into a frenzy as he issued a “to-do list” for 2018, beginning with what he called the “widespread massive removal of Republicans from the House and Senate the likes of which this country has never seen.”

Michael Moore calls for the removal of Trump and change in the US political climate at the #PeoplesSOTU pic.twitter.com/CvzXPWWpMV

"I want to see thousands of polling places with lines so long you can't see where the end of the line is." @MMFlint at the #PeoplesSOTU pic.twitter.com/npiOvt7sep

“The need to remove him — and also any Democrat who is in the way of removing him — that is, at this point, a moral imperative for each and every one of us,” he added. “Removing him, and Pence, and the whole disgusting lot of them… still won’t be enough. We must remove and replace the system and the culture that gave us Trump in the first place.”

“As we seek to rid ourselves of Trump, we must also cleanse our American soul of our white male privilege,” Moore continued.

"They may think that our belief in true participatory democracy is waning. That we are complacent, that we are distracted, that we are just too beaten down from this horror show year we've had… But we are here to prove them wrong!" @CynthiaNixon at the #PeoplesSOTU pic.twitter.com/R45MYdcSMa

Nixon, star of HBO’s Sex and the City, said 2017 had been a “dark year for America” and blamed Russian interference for “shifting the election” to Trump.

“First and foremost, we need to make sure that Robert Mueller is able to conduct a thorough and unimpeded investigation,” Nixon said, adding that if Trump interferes in the Special Counsel’s probe, “we must take to the streets as never before.”

Amy Schumer introduced comedian Wanda Sykes, who spoke briefly about the “ugly underbelly” of the country that emerged in 2016 to elect Trump.

Musical entertainment was provided by Common and Andra Day, who performed their Grammy- and Oscar-nominated song “Stand Up for Something,” and by Rufus Wainwright, who performed the song, “Hallelujah” to a slideshow featuring images of immigration activists and Resistance marches from the previous year.

Steyer, who has spent millions of dollars on an advertising campaign calling for Trump’s impeachment, slammed what he called the administration’s “systematic attempt to take away the rights and dignities of Americans.”

"We have to start telling the true story in the United States. Because until we tell the true story and we let them tell their lies, then a thousand policies will come out of those lies." @TomSteyer #PeoplesSOTU pic.twitter.com/dgEBaRMItn

“What we’re seeing.. this is the heart of democracy. This is the heart of patriotism. The people in this room are American patriots, standing up for basic American values,” Steyer said. “This is right and wrong. And we don’t compromise on the rights and dignities of Americans.”

The three-hour public event — sponsored by left-wing organizations including Planned Parenthood and MoveOn.org — came as President Trump prepares to deliver his first State of the Union Tuesday amid a booming U.S. economy but stagnant approval ratings.

Many of the celebrities at Monday night’s event joined anti-Trump Women’s Marches across the country earlier this month on the first anniversary of the president’s inauguration.