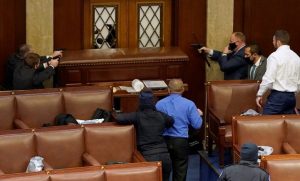 A Capitol police officer has died from injuries suffered during the protest on January 6.

More than 50 capitol police and Metropolitan Police Department officers were injured, with several hospitalized with serious injuries, one seriously, “after he was pulled into a crowd and assaulted.”

Four other people died on Wednesday, including Ashli Babbitt — a 14 year veteran who was shot by Capitol Police.

Sund has faced harsh criticism for the response to the unrest and failing to keep the determined protesters out of the building.

He said that “United States Capitol Police officers and our law enforcement partners responded valiantly when faced with thousands of individuals involved in violent riotous actions as they stormed the United States Capitol Building. The violent attack on the U.S. Capitol was unlike any I have ever experienced in my 30 years in law enforcement here in Washington, D.C.”

“We prioritized lives over property, leading people to safety,” DC’s Police Union Chairman Gus Papathanasiou said in a statement about the police response to the unrest. “Not one Member of Congress or their staff was injured. Our officers did their jobs. Our leadership did not. Our Law Enforcement partners that assisted us were remarkable.”

Videos have also been circulating of police officers appearing to let protesters into the building.

Former U.S. Capitol Police Chief Terrance Gainer has said that they may have been attempting to de-escalate a bad situation.

“Sometimes when you don’t have enough personnel, you can’t stand and fight a large crowd like that,” he said on NBC‘s “Today” show Thursday.