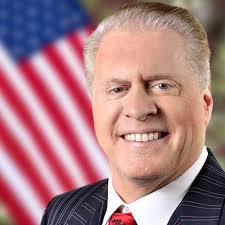 I have the most important Christmas message ever for President Trump. I’m one of the few who can deliver this message. I understand the man. I appreciate the man. Even the liberal media has described me as President Trump’s fiercest champion since the day he came down that escalator in June 2015

The liberal Daily Beast called me, “The Las Vegas version of Trump.”
Anthony Scaramucci said, “Wayne Allyn Root was there for Trump before Trump was there.”

Steve Bannon only days ago called me “The OG (Original Gangster) for Trump and the MAGA Movement.”
And my current #1 bestselling book, “TRUMP RULES” catalogues my 41 years of studying and modeling Trump and his rules of success. It’s been a #1 bestseller at Amazon in a dozen categories for the past 7 weeks.
So, it’s pretty well established as fact, I’m #1 in President Trump’s corner. So, no one is in a better position to tell him the cold, hard truth…

First, because Democrats cheated and stole this election, without punishment (so far). If they get away with rigging and stealing this election, it’s all over for Republicans forever more. They stole the election with you in charge. Who’s going to stop them, when they’re in charge? That’s like letting the wolf guard the hen house. It’s only going to get worse.
Secondly, the 2024 election will not matter. Simply because America won’t exist in 2024. Not the America we know now. Democrats will destroy that America. Trust me, this will be a foreign country by 2024.

By 2024 there will be tens of millions of new Democrat voters. Democrats won’t even need to steal elections anymore. They won’t need dead voters. They won’t need to stop counting at Midnight on election night and add millions of emergency fake ballots in the middle of the night. No more need for vans at 3 AM. No more Postal Service 18-wheelers filled with fake ballots rushed to Pennsylvania the day after the election. No need to keep Republican witnesses out of the counting room. They won’t even need computer systems to switch votes away from you.

That will all be old news by 2024. To paraphrase James Carville, “It’s all about illegal immigration, stupid.” First, Democrats will legalize the 22 million to 32 million illegal aliens already in the country. Next, they’ll knock down Trump’s wall and open the borders, while offering free healthcare for anyone who comes, from anywhere in the world. Tens of millions more foreigners will come to America. Democrats will make sure they can all legally vote.

Those two moves will erase any need for cheating and stealing elections. Democrats will have 40 to 60 million new Democrat voters by 2024. Almost all of them will legally vote Democrat, in order to keep the bribes coming (citizenship, welfare, food stamps, free healthcare, free college).
No cheating will ever be necessary again. America will cease to exist. America will be a foreign nation. Certainly, foreign to Republicans and patriots.

So, as much as I love and appreciate you Mr. President, and everything you’ve done for America, there is no tomorrow for you. 2024 is a mirage. You can never win again. You won’t even recognize America in 2024. It will be a country no Republican can live in, let alone run.
So, my Christmas message is simple. Your time to win is now. You have to overturn a stolen election between now and January 20 th . But that’s okay. You’ve got this. I’ve studied your “TRUMP RULES” for 41 years. You are Houdini. You are a man of miracles. Only you can pull this off. You were born to do this. You have the rules and tools to make the impossible, possible. I wrote the book. I believe in you.

But it has to be now. You’ve got only a few days left. After that, your window closes forever.
And, so does the future of America.

Wayne Allyn Root is known as “the Conservative Warrior.” Wayne is the author of the new #1 national bestselling book, “TRUMP RULES.” Wayne is a CEO, entrepreneur and host of the nationally-syndicated “Wayne Allyn Root: Raw & Unfiltered” on USA Radio Network, daily from 6 PM to 9 PM EST and the “WAR RAW” podcast. Visit ROOTforAmerica.com, or listen live at http://usaradio.com/wayne-allyn-root/ or “on demand” 24/7 at iHeartRadio.com.