Breaking: Sen. Lindsey Graham Said Those Who Breached Capitol Is Going to Regret 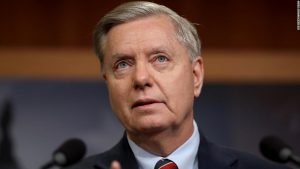 Sen. Lindsey Graham (R-S.C.) held a press briefing on Thursday afternoon to address his concerns about security at the U.S. Capitol being breached by what he called “domestic terrorist” during the Jan. 6 joint session of Congress to count Electoral College votes.

“The first thing that stands out to me is how embarrassed and disgusted I am that the United States Capitol going to be taken over by domestic terrorists while we’re in session, transferring power from one president to the other, that a band of people who are terrorists, not patriots, literally occupied the floor the House, drove the Senate, out of its chamber,” Graham said.

On Wednesday, thousands of people gathered around the Capitol building to voice their concerns about alleged election fraud against President Donald Trump. While the majority were peaceful, some violently pushed their way past police, broke windows, and entered the Capitol, forcing the debate in the Senate and House chambers to be halted as lawmakers were told to shelter in place.

Graham said he agrees with Sen. Chuck Schumer’s (D-N.Y.) call for the Senate Sargent-at-Arms to resign for not fulling his responsibility of securing the Capitol building.

As potentially the new Senate majority leader if Democrat Jon Ossoff is certified the winner of the race against incumbent Republican David Perdue, Schumer said that he will fire the Senate Sargent-at-Arms Michael Stenger on Jan. 21 if Stenger does not resign.

“It was appalling how ill-prepared the Congress was for these attacks, which were known about in advance,” Schumer said about the assault on the U.S. Capitol.

The South Carolina Senator said, “Anyone in charge of defending the Capitol failed in their duties. If they would have been in the military, they would have been relieved of their commands and most likely court-martialed. So, the first thing that has to happen is to hold those accountable for failing to defend the nation’s capital while the Congress was in session.”

Graham added, “Why am I so worried? It would have been so easy for a terrorist organization to infiltrate this movement.”

The senator went on to say that lawmakers should have condemned and prosecuted the rioters and looters during the social justice protests that often turned violent during the summer of 2020.

“Political protest in this country is the heart and soul of who we are,” he continued. “But we haven’t been protesting lately, we’ve been burning down cities. We’ve been attacking federal courthouses. We’ve been looting in the name of social justice. And now, we’ve occupied the Capitol. This needs to stop,” he said.

The Chairman of the Judiciary Committee said there is resounding agreement from both parties that the people who breached security and forcibly occupied the Capitol should be prosecuted to the fullest extent of the law, and that leaders should be consistent with holding lawbreakers accountable.

“To my Democratic colleagues, I share your disgust and embarrassment and determination to make sure that what happened in our Capitol never happens again but you need to speak up when this happens in other places. Lawlessness in one place breeds lawlessness everywhere,” he added.

“When one cause resorts to violence and people are not prosecuted, other causes believe, ‘Maybe this is ok.’ So the mistake we made is when people tried to destroy the courthouse in Portland, they weren’t prosecuted to the full extent of the law.

“Until every political movement out there, no matter how just your cause in your own mind, [understands] using violence will not advance your cause … it will only lead to your personal incarceration, or if you go too far, to injury.”