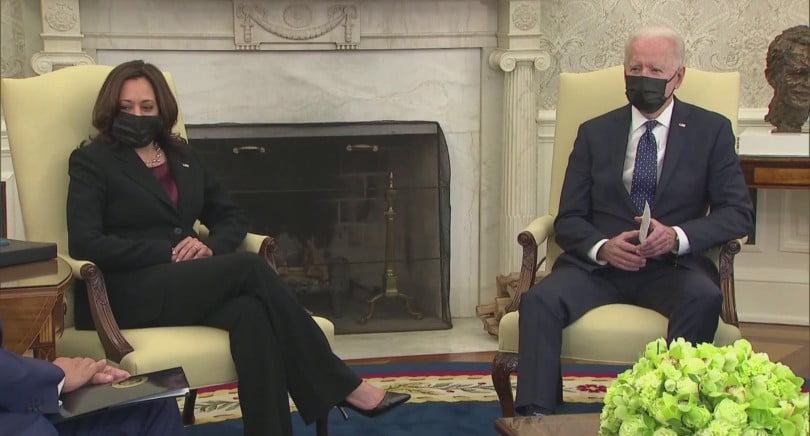 Joe Biden revealed that he called the family of George Floyd and on Tuesday he relayed the contents of that call, telling the press that he’s praying the jury returns “the right verdict.”

During brief remarks in the Oval Office, Biden said: “The evidence is overwhelming in my view.”

“I can only imagine the pressure and anxiety they’re feeling,” Biden said. “And so I waited until the jury was sequestered, and I called. And I wasn’t going to say anything about it.”

Biden said that it was reported on television that “it was a private conversation because Joe understands what it’s like to go through loss.”

“And um they’re a good family,” Biden said. “And they’re calling for peace and tranquility, no matter what that verdict is.”

“I’m praying that verdict is the right verdict, which is I think it’s overwhelming in my view. I wouldn’t say that unless the jury was sequestered now, not hearing me say that,” he added.

Joe Biden comments on the Derek Chauvin trial: “I’m praying the verdict is the right verdict, which I think is overwhelming in my view.” pic.twitter.com/sr6CSIMlko

Those in favor of the American judicial system and the practice of due process decried the president’s interference in the case.

“The judge asked elected officials not to get involved and influence the jury. In response, the mayor of Minneapolis and the President of the United States both publicly called for guilty verdicts. These crooks have no respect for the rule of law at all. It’s a joke to them,” Walsh wrote.

Politicians, mainly on the Democrat side of the aisle, have seized the Floyd case and used it as a soapbox to call for more police reform.

California Rep. Maxine Waters, who caused controversy when she called for protesters to be “more confrontational” if Chauvin was not found guilty of murder.

After the prosecution and defense gave their closing arguments in the case on the death of Floyd, the judge in the case said that Waters’s comments could be cause for an appeal if Chauvin is convicted.

Judge Peter A. Cahill absolutely scorched Waters in his response, in which he declined to declare a mistrial in the case.

“I’ll give you that Congresswoman Waters may have given you something on appeal that may result in this whole trial being overturned,” the judge said.

“Their failure to do so is abhorrent,” he said.

And then there was Michigan Democratic Rep. Rashida Tlaib, who called to abolish police and incarceration, though not directly related to the Floyd case. Which begs the question, where would criminals go?