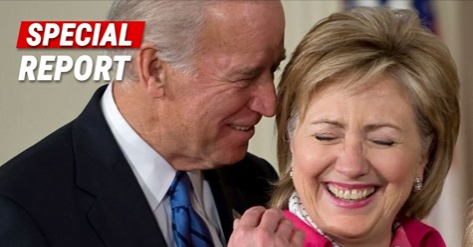 If Biden does come out as the winner of the 2020 Election, it seems another familiar face might be returning to D.C.

It’s possible that Hillary Clinton will be back in the news, doing as much damage as possible to the United States.

This time, it won’t be through the State Department, but it will continue to allow her to extort foreign leaders for power and money.

Because, word is, Biden might make her the U.S.’s figurehead at the U.N.:

The Washington Post reported on Thursday that a person familiar with the matter said Clinton was “being discussed” as a potential pick because it would purportedly raise the prestige and standing of the U.S. after President Trump’s time in office.

I can’t think of a worse person to represent America at the U.N. That’s like putting a career criminal in charge of a daycare center.

Controversy surrounded Clinton’s time as Secretary of State. That’s largely due to reports that she was running a pay-for-play scheme with foreign powers.

She and her staff even deleted thousands of documents to keep the FBI from finding any evidence.

Making her ambassador to the Election United Nations might be just as devastating. Crooked Hillary could be back to wheeling and dealing with some of the world’s most corrupt leaders.

Sure, she belongs with that group, but it won’t bode well for American citizens and many around the world.

Do you want Hillary Clinton serving in our government again?