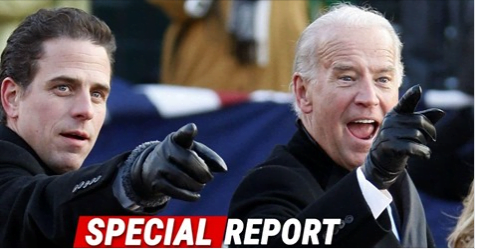 Despite the left’s best efforts, we continue to learn more about Hunter Biden and Joe’s possible involvement in his China/Ukraine deals.

Ever since the bombshell revelation of alleged emails, people have come forward to confirm some of the worst of the rumors.

A former partner of Hunter’s provided his own documents, saying it’s all true.

Rasmussen actually asked voters their opinion on the scandal. This is what they said:

The latest Rasmussen Reports national telephone and online survey finds that 54% of Likely U.S. Voters believe it’s likely that Biden was consulted about and perhaps profited from Hunter’s overseas business deals including at least one involving a company in mainland China.

This is pretty shocking. Over half of polled likely voters believe Joe Biden was involved—and perhaps profited—from Hunter’s business deals.

They even believe he was the “big guy” mentioned in an email about payouts from China.

For years, Americans have demanded answers about Joe Biden’s connection with his son’s business deals.

Many people worried that foreign countries, including China and Ukraine, were able to influence Biden while vice president—through big-dollar deals with his son.

President Trump was so concerned, he asked the president of Ukraine to look into it. Democrats were so outraged that Trump wanted to seek justice, they impeached him over it.

The release of this supposed laptop only throws fuel on the fire. Some documents suggest that not only did Biden know about Hunter’s deals, but he was getting rich too.

That casts plenty of doubt on his time as vice president. If true, it could be serious (as in: DOJ serious).

The poll also mentioned that some voters worry about Donald Trump’s ethics, most likely thanks to the Russian collusion hoax.

But we’ve never seen such evidence pour out from Trump’s businesses like we’re seeing from Hunter Biden.

Do you think with 54% of voters worried about Biden—that Americans will trust him if he is ultimately elected?

Do you think Joe Biden knew or was somehow involved in Hunter Biden’s overseas deals?