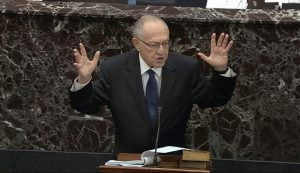 Many people have weighed in on the Democrats’ rushed attempt to impeach Trump. Even though the 2020 Election has been decided, they want to remove Trump forcibly from office.

He is now one of the loudest voices fighting against this latest move against Donald Trump. He says there is not enough time in Trump’s term for the Senate to convict.

And if the left drags this out longer, it’s doomed to fail.

Congress does not have the power to hold an impeachment trial for any official after they’ve left office, Harvard Law School professor emeritus Alan Dershowitz argued on “Hannity” Monday…

Dershowitz insisted that Congress has “no jurisdiction” over Trump after he has left the White House.

“The Constitution talks about impeachment as being a mechanism for removing somebody from office. It also says if you remove him from office, then you can disqualify him further, but you can’t just have a trial designed to disqualify him from running in 2024,” he said.

Dershowitz claims that impeachment is designed to remove someone from office. It is effectively useless after they leave.

But the timeline just doesn’t pan out for Democrats. The Senate won’t return until January 19. By the next day, Trump will be gone.

Can they really continue to convict him, after that? The Constitutional expert doesn’t seem to think so.

He, like many others, believes the Democrats are trying to do this to stop Trump from running again in 2024.

They seem to think that impeaching him after he leaves office will stop him from being able to return to politics.

It takes 67 votes in the Senate to convict a president and remove him from office. They just don’t have the votes.

It seems Dershowitz’s views of the issue are the most accurate.

Do you think Democrats should try to impeach Trump again?