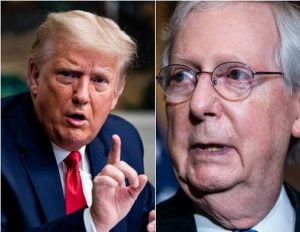 A62 percent majority of Americans said they blame congressional Republicans and President Donald Trump for failing to hash out an agreement for $2,000 stimulus relief checks.

About one-third of Americans surveyed (32 percent) said they blame congressional Democrats and House Speaker Nancy Pelosi for failing to push the $2,000 check legislation through both chambers.

The same polling center released data that found 81 percent of likely voters prefer $2,000 checks over $600, with just more than half hoping for a Democratic-controlled Senate following the January 5 Georgia runoff election.

The majority of Americans surveyed in the latest Data for Progress polls do appear to blame Republicans (62 percent). But progressives have become split after Senate Minority Leader Chuck Schumer led several Democrats Friday in pushing through a defense spending bill which Vermont Senator Bernie Sanders wanted to use as leverage for $2,000 checks. The push for $2,000 direct payments amid the coronavirus pandemic is now all but over, even though it marked a rare instance in which Trump, a handful of Senate Republicans and congressional Democrats all finally agreed on a relief bill.

“Turns out supporting a $2000 survival check is not only good policy but good politics. In few days, with Democratic Senate and House we can pass it and have it be recurring monthly during the pandemic,” tweeted Minnesota Congresswoman Ilhan Omar, sharing a link to the poll Friday.

But critics responded to Omar’s sharing of the Data for Progress polls that show blame being pointed at Republicans, with many asking why she and others voted in favor of the $600 checks in the first place. Many responses wondered why Democrats didn’t leverage Senate Republicans for the $2,000 checks.

“Which Democratic senators actually support the $2000 checks, though? So far, at least 41 of them don’t seem to think it is much of a priority, but they moved hella quick to defeat Bernie’s filibuster alongside their Republican friends to overfund the Pentagon,” wrote Utah resident Josh Bowden.