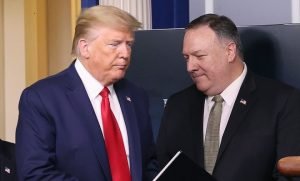 Even when literally every one is turning on Trump, Mike Pompeo is standing by his side.

In a recent statement, Pompeo did not follow some of his D.C. colleagues like Nikki Hailey in bashing the president, but instead stated that he’s proud of what him and Trump accomplished.

If only more politicians in D.C. were like this.

Pompeo’s message was a stark contrast to that from Trump’s former United Nations ambassador Nikki Haley, who told Republican National Committee members during a closed door speech on Thursday that Trump “will be judged harshly by history.”

It was also a stark contrast to two Trump cabinet secretaries who have resigned in recent days — Betsy DeVos and Elaine Chao — after thousands of the president’s supporters protested at the Capitol and some entered and engaged in violence or vandalism.

Pompeo said what happened was tragic but that those walking away from the president were “not listening to the American people.”

“While I think we all think the violence that took place in the place where you all work in the Capitol was tragic, I’ve watched people walk away from this president already. And they are not listening to the American people. Not remotely,” he said.

Pompeo also discussed the administration’s foreign policy successes, and contrasted it with eight years under the Obama administration.

“We watched eight years of the foreign policy of the previous administration that was fantasy. Fantasy. They would enter into agreements and arrangements that weren’t based on anything with the potential to be lasting, and if America First in foreign policy means anything, it means being realistic.” He added:

We need more people like Pompeo in our government.

Maybe if there was, then Americans wouldn’t be so extremely disgusted with our government.