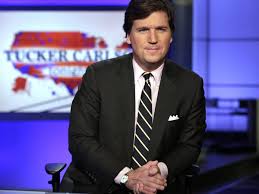 In a video of the exchange, which has gone viral, Carlson introduces his guest as Alex Uematsu, a student from Rutgers University in New Jersey upset over President-elect Donald Trump’s promise to crack down on illegal immigrants.

“I believe that everyone should be able to come to the United States,” declared Uematsu. “There is no line. We can let in as many people as we choose.”

To that, Carlson informed Uematsu that, “most of those people who do come… are a net cost to taxpayers. They take more in services than they produce.”He followed up by asking, “so you believe, then, that taxpayers have a moral obligation to subsidize anybody who wants to come here?”

He followed up by asking, “so you believe, then, that taxpayers have a moral obligation to subsidize anybody who wants to come here?”

Uematsu, true to his liberal nature, responded by insisting that illegal immigrants actually aren’t a financial burden – but rather, a huge benefit.

Carlson bluntly informed him, “Yeah, you heard wrong, cause it’s actually not even close.”

Check out the video below to see the full exchange, which ultimately left Uematsu looking rather dumfounded.

Carlson could hardly contain his laughter by the end.

Following that interview, several internet users joined in to blast Uematsu for his rather misguided perceptions.

Tucker Carlson making mincemeat out of this misguided young liberal. Our borders should be open but his apartment door, not so much.

#tuckercarlson your guest basically said open the borders! 6 BILLION WANT TO COME! US population is 324,707,000!He needs to go back to class https://t.co/w4CkSCFkXH

The President-elect has pledged to deport millions of illegal immigrants, while his competitor (once upon a time, anyway) Hillary Clinton had built a large part of her presidential campaign on the promise of open borders – a proposal that critics promised would end in disaster.

Thankfully, we’ll never have to find that out firsthand.

You can catch the show – which, so far, has featured Carlson absolutely dragging liberal guests – nightly at 7 eastern.