WATCH: McConnell fires back at Dems upset Trump has not conceded “let’s have no lectures” 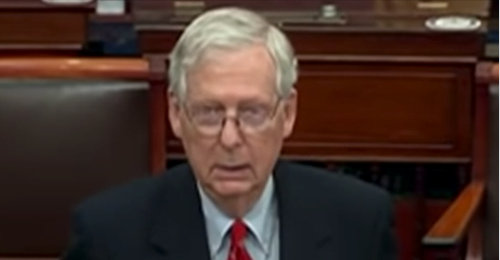 McConnell said “more broadly, let’s have no lectures about how the President should immediately, cheerfully accept preliminary election results from the same characters who just spent four years refusing to accept the validity of the last election.”

McConnell later added “and who insinuated this one would be illegitimate, too, if they lost again. Let’s have no lectures on this subject from that contingent.”

In August, Speaking with Jennifer Palmieri on Showtime, Hillary Clinton urged Biden to build a massive legal operation and not concede “under any circumstances.”

Hillary Clinton says “We’ve got to have a massive legal operation, I know the Biden campaign is working on that”

She later says “This is a big organizational challenge but at least we know more about what they’re going to do and Joe Biden should not concede under any circumstances because I think this is going to drag out and eventually I do believe he will win if we don’t give an inch.

“Joe Biden should not concede under any circumstances.”