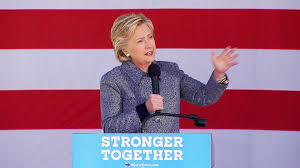 Watching last night’s presidential debate, it wasn’t all that hard to spot Hillary Clinton’s tactic. As one New York Times article puts it, “she turned herself into his restless tormentor, condescending to him repeatedly.”

Clinton carried her game plan right through to her post-debate press conference.

“You know, it was horrifying – what he said on the debate stage tonight,” the Luke Skywalker suit-clad Clinton said smugly.

She had a lot to say about Trump’s supposed lack of character. But when asked to comment on the James O’Keefe video controversy, Clinton’s tongue appears to have gone the way of the $6 billion she mismanaged.

“I know nothing about this – I can’t deal with every one of his conspiracies,” she rambles while holding onto the seat beside her for dear life. “I hope you all have something to eat and something to drink on the way back to New York!”

At that, Clinton turns and walks away, once again avoiding addressing one of the largest concerns brought up in the debate.

The James O’Keefe videos show members of Hillary’s camp admitting to purposely disrupting Trump rallies and inciting violence. That would be, as Trump pointed out at last night’s debate, illegal.