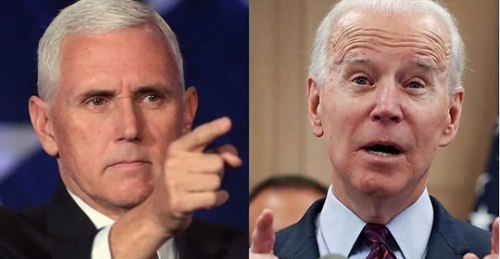 Mike Pence has overseen the administration’s COVID response from day one.

And while he’s worked hard to protect American lives, Democrats have done everything to undermine the effort.

At the start of the pandemic, Democrats were quick to beg Trump for help.

Today, all they do is play games over the virus.

Well, Pence is sick and tired of it.

And he’s hitting them hard on a serious topic they are trying to undermine:

Vice President Mike Pence took Joe Biden and his running mate Sen. Kamala Harris, D-Calif., to task on Sunday for what he said was a clear effort to undermine any safe and effective COVID-19 vaccines.

We shouldn’t be surprised why they’re doing this. The Trump administration has been accelerating treatments and vaccines for the virus.

Trump has promised to get treatments an

d vaccines to all Americans in need—at no cost.

Such a move would be a massive win for the Trump administration. Democrats would have no counter to that.

So, are we at all shocked that during a major election, Democrats are trying to downplay a vaccine?

If the vaccine was ready soon, it could be used to end the pandemic-inspired lockdowns.

Many believe Democrats are prolonging the lockdowns to make the president look bad. Some even think talk of the virus will stop altogether after November 3.

Trump has already been able to bring the country back from devastating lockdowns. Millions of jobs have been adding in this “V” recovery.

If he is able to get a vaccine to Americans, what could Democrats do? So, they are trying to downplay it—even after saying it was needed months ago—just to deprive Trump of another win.

Pence is slamming them for playing political games when lives are in the balance.

We know the elderly and those with pre-existing conditions are at the greatest risk for COVID. A vaccine could mean a lot to those still in fear.

Why would Democrats discourage that?