Trump: Dems ‘knew’ their Russia probe memo was too sensitive for public release 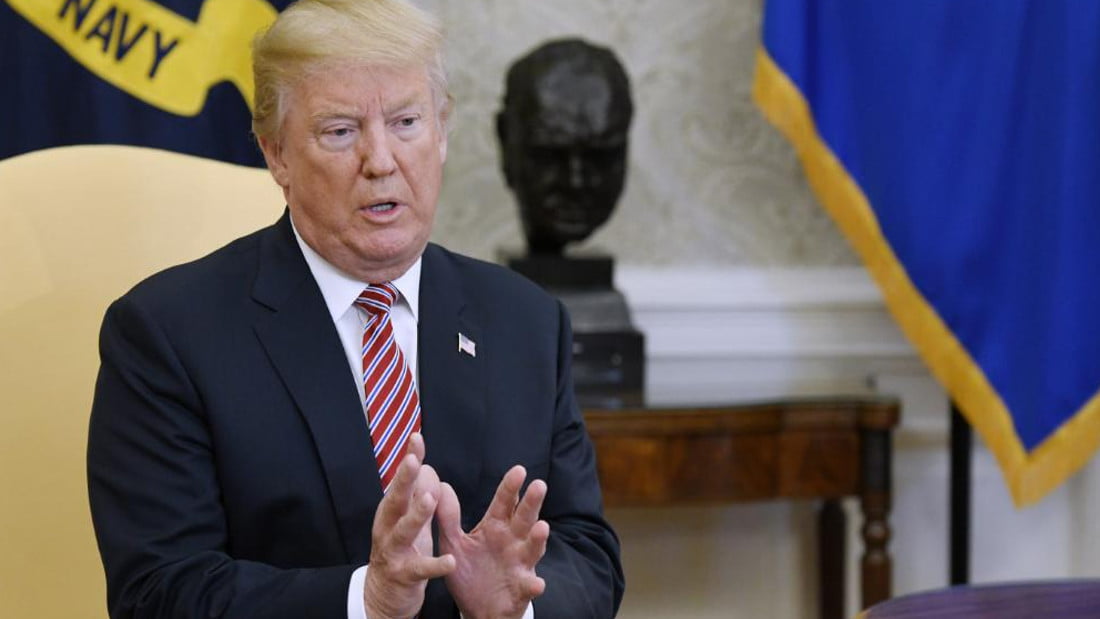 President Trump on Saturday defended his decision to send the Democrats’ memo on the Russia probe back for edits — accusing them of playing politics for submitting a document laden with “sources and methods” too sensitive to make public.

“The Democrats sent a very political and long response memo which they knew, because of sources and methods (and more), would have to be heavily redacted, whereupon they would blame the White House for lack of transparency,” Trump tweeted early Saturday morning. “Told them to re-do and send back in proper form!”

The Democrats sent a very political and long response memo which they knew, because of sources and methods (and more), would have to be heavily redacted, whereupon they would blame the White House for lack of transparency. Told them to re-do and send back in proper form!

Trump’s remarks came a day after the White House notified the House Intelligence Committee that the president was “unable” to declassify the memo, citing national security concerns.

In a letter to the committee, White House counsel Don McGahn said the memo contains “numerous properly classified and especially sensitive passages” and asks the committee to revise it with the help of the Justice Department.

McGahn said Trump is still “inclined” to release the memo in the interest of transparency, if revisions are made.

Trump’s decision to withhold declassifying the memo was met with strong criticism from top congressional Democrats.

“President Trump’s refusal to release (the) memo is a stunningly brazen attempt to cover up the truth about the Trump-Russia scandal from the American people,” said House Minority Leader Nancy Pelosi, D-Calif. “The president’s decision to block the Democratic memo from release is part of a dangerous and desperate pattern of cover-up on the part of the president.”

The Democrat memo counters a document in which Republican leaders of the GOP-controlled committee allege government abuse in the Russian probe. Trump declassified the GOP memo last week, allowing its publication despite objections from the Justice Department.

The memo argues the FBI and Justice Department, at least in part, used a loosely-vetted, Trump opposition-research dossier by former British spy Christopher Steele and financed in part by Democrats, to apply for a surveillance warrant from the Foreign Intelligence Surveillance, or FISA, court on former Trump campaign adviser Carter Page.

California Rep. Adam Schiff, the committee’s top Democrat, on Friday argued that Trump is treating the two memos differently, saying the president is now seeking revisions by the same committee that produced the original Republican memo.

Still, Schiff said Democrats look forward to conferring with the federal agencies “to determine how we can properly inform the American people about the misleading attack on law enforcement by the GOP.”

Committee members vote unanimously Monday to have the Democrats’ memo released. However, several Republicans said they thought it should be redacted.

House Speaker Paul Ryan has said the Democrats’ memo should be released.

After the release of the GOP memo, Trump said its release “vindicates” him in the ongoing Russia investigation led by special counsel Robert Mueller. But congressional Democrats and Republicans — including Ryan, R-Wis., and fellow GOP Rep. Trey Gowdy, of South Carolina, who helped draft the GOP memo — have said it shouldn’t be used to undermine the special counsel.

The president had until Saturday to decide whether to allow the classified material to become public.

The White House has sent lawmakers a letter signed by Deputy Attorney General Rod Rosenstein and Wray, as well as a marked-up copy of the memo, laying out sections it considers too sensitive to make public.

Among those passages are some that the Justice Department says could compromise intelligence sources and methods, ongoing investigations and national security if disclosed.

Democrats accused the White House of releasing the GOP memo to distract from the probe, which is looking into whether Trump’s campaign was in any way connected to the Russian interference in the 2016 elections.

California Sen. Dianne Feinstein, the top Democrat on the Senate Judiciary Committee, has read the classified information on which both memos are based. She tweeted that Trump’s blocking the memo is “hypocrisy at its worst.”

One week after he released the misleading and incomplete Nunes memo, President Trump tonight blocked the release of the Schiff memo that sought to fill in the holes. This is hypocrisy at its worst. (1/3)

Republicans have argued that the reliance on Steele’s material amounted to an improper politicization of the government’s surveillance powers.

Democrats have countered that the GOP memo was inaccurate and a misleading collection of “cherry-picked” details.

They noted that federal law enforcement officials had informed the court about the political origins of Steele’s work and that some of the former spy’s information was corroborated by the FBI.

They also noted that there was other evidence presented to the court besides Steele’s information, though they have not provided details.

The Democrats’ memo is expected to elaborate on these points.