Top Contenders for Biden’s Cabinet Draw Fire From All Sides 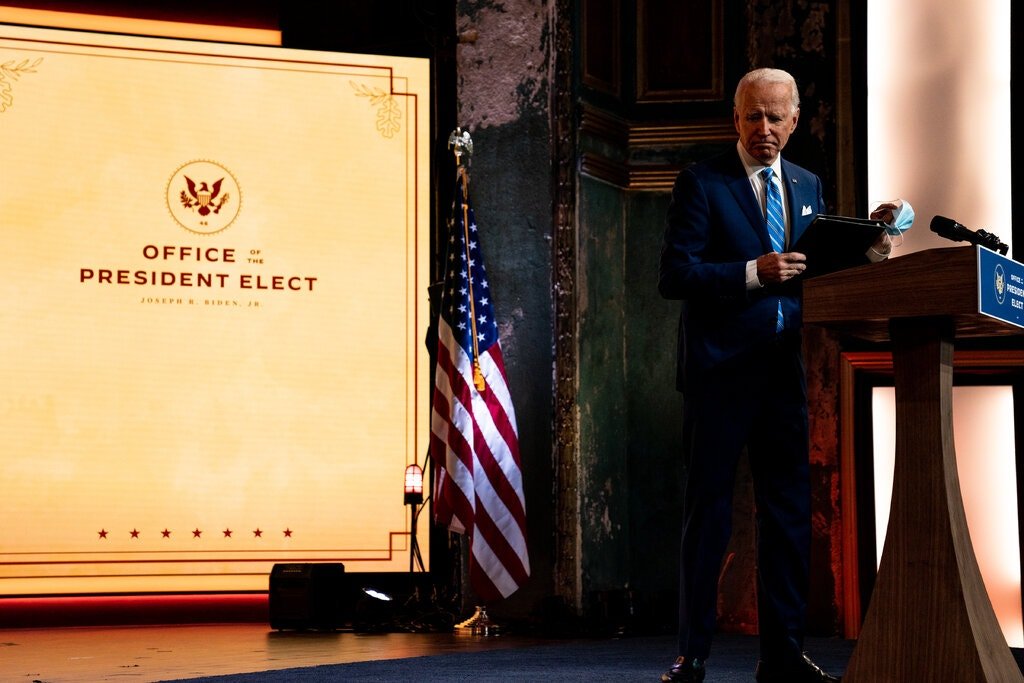 Lists of names of those the president-elect is said to be considering are flying across Washington, prompting lawmakers and interest groups to raise questions about some top contenders.

WASHINGTON — There are leading candidates and dark horses. There are potential roadblocks from progressives and conservatives. And there are competing factions hoping to be part of the next president’s inner circle, all jockeying for influence.

President-elect Joseph R. Biden Jr. moved quickly this past week to name the first two members of his cabinet, picking one of his closest confidants to be the nation’s top diplomat and choosing an immigrant to lead the Department of Homeland Security, a first.

But as Mr. Biden fills out the rest of his team in the days and weeks ahead, the task will become more complicated, requiring him to navigate tricky currents of ideology, gender, racial identity, party affiliation, friendship, competence, personal background and past employment.

Aides to Mr. Biden who are managing the selection process are revealing little about whom he intends to choose. And yet, as is typical in Washington in the early days of a transition, the names of those the president-elect is said to be considering are a frequent source of discussion. This time, the gossip is spreading via Zoom calls, Twitter posts and encrypted text messages sent by lawmakers, lobbyists and political consultants.

“I can assure you, there will be more cabinet announcements in the weeks ahead, so buckle up for December,” Jennifer Psaki, a senior transition adviser, told reporters this past week.

Whom Mr. Biden will tap to be the next attorney general is among the most talked about — and politically fraught — decisions that he will make as civil rights issues roil the country and some Democrats expect investigations into President Trump and his associates.

Sally Q. Yates, the deputy attorney general in the final years of the Obama administration, had long been considered the front-runner. Mr. Biden is close to her and has told friends that he could imagine her as the nation’s top law enforcement official. But some advisers fear that Republicans would block her nomination because of her refusal to defend Mr. Trump’s first travel ban and her role in the early stages of the investigations into his campaign and his associates.

Mr. Biden could instead pick Lisa Monaco, the former homeland security adviser for President Barack Obama who was a finalist in 2013 to be F.B.I. director. And like Ms. Yates, she worked well with Mr. Biden when he was vice president.

But both women are up against Deval Patrick, the former Massachusetts governor who served as the head of the department’s civil rights division in the Clinton administration and would be the second Black man to be attorney general.

The president-elect’s aides see civil rights issues as a far more deep-seated problem than simply one that has arisen because of Mr. Trump. The aides believe that Mr. Patrick’s experience at the NAACP Legal Defense and Educational Fund Inc., and his stewardship of the department’s civil rights division positions him to take on that issue.

Others around the president-elect are not eager to reward Mr. Patrick, who jumped into the Democratic nomination race last year to challenge Mr. Biden as a politically moderate answer to the party’s more liberal candidates. Xavier Becerra, the attorney general of California, is also under consideration for attorney general.

Mr. Biden has also not yet announced his pick to lead the Pentagon, despite having introduced other members of his national security team.

One candidate for the job, according to people familiar with Mr. Biden’s deliberations, is Michèle A. Flournoy, a senior defense official for President Bill Clinton and Mr. Obama. But her lock on the job may have slipped in recent days as some progressive groups have attacked her work at consulting firms that have represented military contractors and foreign governments.
“Her employment at these two companies, as well as her time as a paid board member for defense contractor Booz Allen Hamilton, creates potential conflicts of interest,” said Mandy Smithberger of the Project on Government Oversight, an ethics watchdog group.

If Mr. Biden does not choose Ms. Flournoy, Elizabeth Sherwood-Randall, a former deputy energy secretary and National Security Council member, and Lloyd J. Austin III, a retired Army general and head of the U.S. Central Command, are possibilities, people close to the process said. The Biden team could also tap Jeh C. Johnson, who served as a top Pentagon lawyer before becoming secretary of homeland security under Mr. Obama.

Should Mr. Biden tap Ms. Yates for attorney general, it may enhance Mr. Johnson’s prospects for the Pentagon because otherwise the traditional top four cabinet department posts — Justice, State, Defense and Treasury — will have gone to white nominees.

Republicans in the Senate will try to reject some of Mr. Biden’s nominees. But his team is just as worried about opposition from Democrats.Michael J. Morell, a former acting C.I.A. director and one of the two leading candidates to be nominated to that position, has drawn the ire of liberals for his outspoken defense of the C.I.A.’s interrogation program.

“Mike Morell wrote that torture was effective and moral,” Senator Ron Wyden, Democrat of Oregon, wrote on Twitter on Wednesday. “He’s wrong on both counts.”

Thomas E. Donilon, a former national security adviser in the Obama administration, is also a leading possibility to take over the C.I.A. His brother, Mike Donilon, is one of Mr. Biden’s closest political advisers. Others under consideration are Sue Gordon, a former principal deputy director of national intelligence who was pushed out by Mr. Trump; Vincent R. Stewart, a retired lieutenant general who led the Defense Intelligence Agency; and Representative Elissa Slotkin, Democrat of Michigan, a former C.I.A. analyst and White House national security aide.

Aides to the president-elect said on Wednesday that he intended to announce more members of his economic team this coming week after choosing Janet L. Yellen, a former Federal Reserve chair, to be his Treasury secretary.

Mr. Biden could pick Roger W. Ferguson Jr., an economist who was vice chair of the Federal Reserve and was under serious consideration for the Treasury job, to lead the National Economic Council or a new board overseeing the recovery from the recession.

Picking Mr. Ferguson, who is Black, to lead the council would help Mr. Biden keep a promise to make his administration look like the rest of America. Other names under consideration for the position are white men, including Bruce Reed, a former chief of staff to Mr. Biden, and Austan Goolsbee, an economist who was chairman of Mr. Obama’s Council of Economic Advisers. Gene Sperling, a veteran economic adviser dating to the Clinton administration, is another possibility, as is Brian Deese, who was deputy director of the National Economic Council under Mr. Obama.

He has come under fire from prominent liberal members of Congress, including Representative Alexandria Ocasio-Cortez of New York, who also oppose consideration of him to lead the Office of Management and Budget, which helps the White House determine economic priorities. But blocking Mr. Reed, who traveled with Mr. Biden for much of the campaign, from the budget office post might only ensure that he winds up in the West Wing, where the president-elect could make him a senior adviser.

To lead the Agriculture Department, Representative James E. Clyburn of South Carolina, the highest-ranking Black member of Congress, is pushing for Representative Marcia L. Fudge, an African-American Democrat from Ohio. Mr. Clyburn, an early and important backer of Mr. Biden, has said the department should be focused more on hunger.

But traditionalists eager to keep a voice from rural America in the post are advocating for Heidi Heitkamp, a former senator from North Dakota, or Tom Vilsack, the former Iowa governor who served as agriculture secretary for Mr. Obama.

To coordinate the response to the pandemic, Jeffrey D. Zients, who was director of the National Economic Council under Mr. Obama, could become Mr. Biden’s “Covid czar.” That job could also go to Vivek H. Murthy, the former surgeon general who helps lead Mr. Biden’s transition panel on the virus.

Mary D. Nichols, California’s climate and clean air regulator, is seen as the top candidate to lead the Environmental Protection Agency. And there is a growing campaign to persuade Mr. Biden to name a Native American as interior secretary. Among the names he is considering: Representative Deb Haaland, Democrat of New Mexico and a rising star in Democratic politics, and Michael Connor, the former deputy interior secretary in the Obama administration. Steve Bullock, the governor of Montana, is also a candidate.

The possibility that Ernest J. Moniz, Mr. Obama’s energy secretary, could reprise his role troubles environmental groups who believe Mr. Moniz did not do enough to steer the country away from fossil fuels. Mr. Biden could also turn to Arun Majumdar, who runs the Precourt Institute for Energy at Stanford.

Rahm Emanuel, Mr. Obama’s former chief of staff and a former mayor of Chicago, is a candidate to run the Transportation Department, but he is disliked by some liberals for how he handled police issues as mayor. Eric M. Garcetti, the mayor of Los Angeles, is another top candidate.

Representative Karen Bass, Democrat of California; Alvin Brown, a former mayor of Jacksonville, Fla.; and Keisha Lance Bottoms, the mayor of Atlanta, are being discussed to lead the Department of Housing and Urban Development. Gov. Michelle Lujan Grisham of New Mexico is interested in becoming secretary of health and human services and would be another Latino in the cabinet.

On Sunday, members of the Congressional Hispanic Caucus plan to release a letter to Mr. Biden emphasizing the importance of Hispanic representation, trumpeting Ms. Lujan Grisham’s experience and urging him to make her the health secretary.

Some allies of Mr. Biden’s on Capitol Hill worry that Mr. Biden’s choices for the biggest jobs in government look too much like professional staff members, with no big personalities who may be better suited to helping drive policy. He could rectify that if he picked one of his Democratic primary rivals — Senator Bernie Sanders of Vermont or Senator Elizabeth Warren of Massachusetts — to lead the Labor Department or the Commerce Department. Liberals would cheer such a nomination, but transition advisers have told Mr. Biden that confirmation of either would be difficult.

In an interview with NBC News, Mr. Biden strongly hinted that he was likely to leave both senators where they are.