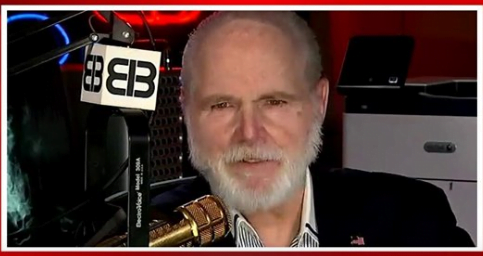 Out of all the conservative pundits and newsmen in America, Rush Limbaugh just might be the greatest.

He’s revered by millions of Americans and Trump supporters. He is the undisputed king of talk radio.

Even when liberals tried to take him down–he only seemed to grow bigger and better. President Trump awarded him with the Medal of Freedom for his devotion to this country.

Most know he is battling Stage 4 Lung cancer and may not have much time left. But he still shows up and speaks to Americans most days.

And he gave a touching Thanksgiving goodbye that will be remembered for years to come:

And I don’t know why Christmastime as opposed to Thanksgiving, but I thought I would switch it up this year and reiterate these things that I try to share with you each and every year at Christmastime or during this holiday-type season…

And so I owe so many people so much. I’m never gonna be able to adequately thank the people who are responsible for one of the greatest lives anybody could have. I am doing what I was born to do.

Because of his commitment and devotion to American values, Rush has enjoyed decades of success. His show has become a staple to millions of Americans.

For Thanksgiving, he wanted to take a moment to thank them for their support. He said he was doing what he was “born to do” and had one of the “greatest lives” anybody could have.

What’s important to remember is that he’s saying this, while battling cancer. He might be at the end of his life. But instead of being bitter or upset, he’s happy.

He’s thankful for everything he’s achieved and the people who supported him.

That shows us the kind of character Rush possesses. Even in the face of hardship and death, he’s giving thanks.

Perhaps more than anything he’s ever done, that shows the true character of a patriot.

What are your thoughts about Rush Limbaugh today? Are you thankful for his impact on America?