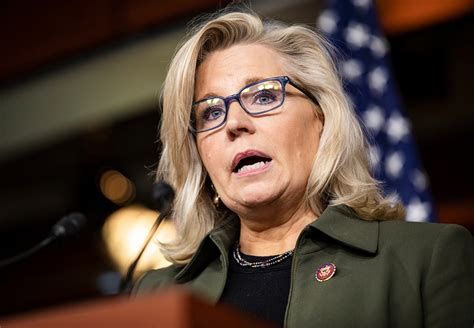 During an interview on CBS News’s Face The Nation, Cheney declared that the 2020 presidential election was not “stolen” from Trump.

“He gave a speech at Mar-a-Lago. He was the keynote speaker at an RNC fundraiser. According to reports in the Times and the Post, he talked about Vice President Pence not doing more to stop the election certification. So he is the best messenger for the party?” Brennan asked.

“The former president is using the same language he knows provoked violence on January 6. As a party, we need to be focused on the future,” Cheney said.

She concluded: “You’re at war with the Constitution. We have to embrace the Constitution and put forward positive solutions. We have to be the party of hope, of aspiration, of inspiration, the party that recognizes and understands that the taxes need to be low, the government needs to be limited in size, a strong national defense, though substantive things, not the party of insurrection.

Republican @RepLizCheney on allegations against colleague Rep. Matt Gaetz that he violated sex trafficking laws: “As the mother of daughters, the charges are sickening."

Pressed if Gaetz should step down from his seat, Cheney tells @margbrennan "no comment" pic.twitter.com/WOtAT0UU9a

Back in February, Wyoming Republican officials overwhelmingly voted in favor of censuring Cheney and called on her to resign.

During an interview on Fox News, Cheney told host Chris Wallace that she will not be stepping down after being censured.

Cheney also argued that Trump no longer has a role in the party as a leader.

“I’m not,” declared Cheney, after Wallace asked if she would resign per the state party’s request.

“It doesn’t bend to partisanship, it doesn’t bend to political pressure,” added Cheney. “It’s the most important oath that we take, and so I will stand by that, and I will continue to fight for all of the issues that matter so much to us all across Wyoming.”

Wallace then asked Cheney: “Is this still the party of Donald Trump, and does Marjorie Taylor Greene still hold a solid place in that party?”

“This person does not have a role as the leader of our party going forward,” she said.

After Cheney’s comments, Florida GOP Rep. Matt Gaetz, one of the most active voices against Cheney, responded on Twitter: “Liz Cheney does not speak for me or Wyoming.”

In the state’s censure resolution, the Wyoming GOP accused Cheney of violating “the spirit” of GOP caucus rules by disclosing her intention to impeach Trump “prior to having any evidence presented” in the House of Representatives.

They also accused Cheney of violating the trust of Wyoming voters, and claimed registered Republicans across the state and country were leaving the party because of Cheney.

Furthermore, the committee called on Cheney to “immediately resign from her position and allow the Wyoming Republican Party to nominate her replacement.”