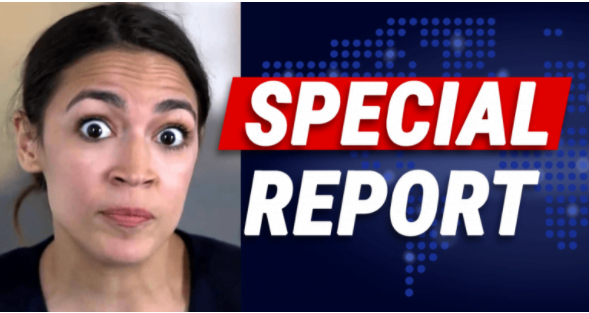 Alexandria Ocasio-Cortez just can’t help herself. She seems to love celebrating anything that might hurt Trump (and America) and help her socialist agenda.

She doesn’t seem to mind when things get really, really bad for other Americans. But even she realized a recent tweet she made was pretty bad.

So, she deleted it. Too bad nothing is ever really removed from the Internet.

Rep. Alexandria Ocasio-Cortez, D-N.Y., tweeted – then quickly deleted – a celebration of the news that U.S. equity markets crashed on Monday, with oil prices turning negative for the first time in history… 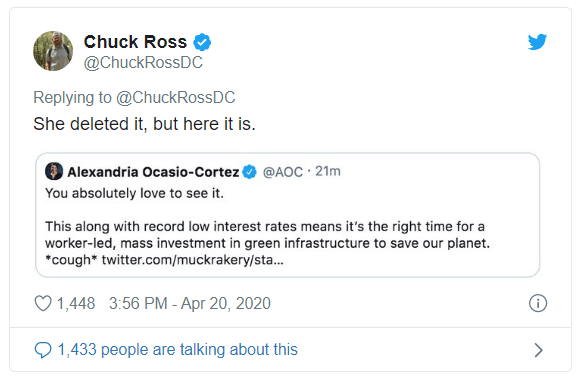 “You absolutely love to see it,” Ocasio-Cortez, a self-described “democratic socialist,” wrote on Twitter. She was responding to a post which stated: “Oil prices now at ‘negative values.’

Yikes. When the price of oil went negative, it meant oil producers were in a bind. They might lose a lot of money—which will result in lost jobs.

Meanwhile, AOC tweeted “You absolutely love to see it.” Uh—really!?

People might lose their livelihoods and AOC was celebrating it?

I know this is the author of the “Green New Deal,” a terrible proposal that would have outlawed fossil fuels. But how could she celebrate something that could have serious ramifications for our country (and the world)?

AOC appeared to be celebrating the loss of trillions from the global economy. Not to mention many Americans losing their jobs. And the loss of a major industry vital to the U.S. economy’s survival.

I guess that’s why she deleted the tweet, huh?

It’s as if they are completely out-of-touch with what’s going on. Do they only see this pandemic as a chance to push their radical agenda?

Did she delete that tweet because she saw the error of her ways… or because she didn’t want people to know her true intentions?

SHARE if you would “love to see” AOC voted out of Congress.