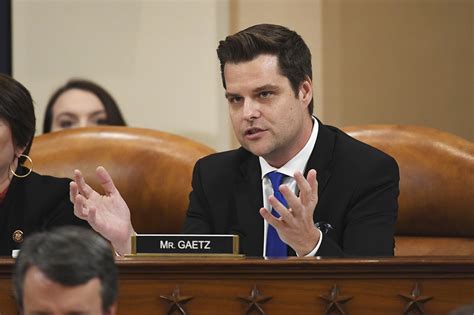 The representative claims that he is being blackmailed by a former Department of Justice official, but British tabloid The Daily Mail says that his arrest in an alleged sex trafficking ring is imminent.

Rep Matt Gaetz is expected to be indicted within the next few weeks as former Florida official and friend Joel Greenberg is believed to have turned on the congressman in the sex trafficking investigation against him, a source close to the probe tells DailyMail.com.

Greenberg, who was elected Seminole County Tax Collector in 2016, is currently in jail awaiting trial after being slapped with a string of charges last year including sex trafficking a minor between the age of 14 and 17.

Earlier this week Gaetz was revealed to be under investigation for allegedly engaging in a sexual relationship with a 17-year-old – who on Thursday was reported to be the same girl Greenberg is accused of sex trafficking, according to The New York Times.

The Florida Republican, 38, has furiously denied the allegations, instead insisting they are part of an alleged $25million extortion plot led by former Justice Department official David McGee.

But sources familiar with the matter say Gaetz’s claims are just an attempt to divert attention from his connection to the Greenberg case as the investigation closes in on him.

Information from The Daily Mail should be taken with a grain of salt as no major media sources have corroborated the report, but we can assume that those in power in the Biden Administration are not fans of Gaetz and would likely love to see him removed from Congress and behind bars.

“The congressman impugned and damaged the reputation of someone who had nothing to do with this,’ the source said to The Mail.

“Gaetz is a sleaze-bag who used a professional with a sterling reputation to divert the attention on a sex investigation focused on him.

“Rest assured that Greenberg has been singing to the feds about his friend Matt Gaetz. That’s why Matt is so freaked out,” the source said.

When Gaetz appeared on the Fox News show “Tucker Carlson Tonight” he said that he was being extorted by former federal prosecutor David McGee, who is now a Pensacola attorney.

“On March 16, my father got a text message demanding a meeting wherein a person demanded $25 million in exchange for making horrible sex trafficking allegations against me go away,” he said on Fox News, naming the person as McGee.

Geta said that he wants the FBI to release the tapes, and idea that McGee, who denies the allegations, supported.

“If there is a tape, play the tape,” McGee said to The Washington Post. “There is nothing on that tape that is untoward. It is a pleasant conversation of a dad concerned about his son and the trouble his son was in.”

“It is completely false,” he said. “It’s a blatant attempt to distract from the fact that he’s under investigation for sex trafficking of minors.”

“I have no connection with that case at all, other than, one of a thousand people who have heard the rumors,” he said.

The 38-year-old Congressman has vehemently denied the accusations that he had any sexual relationship with a minor.

“In the strongest possible terms. I deny that I have ever been with someone underage,” he said. “That is false.”

“They were asked why I had given them plane tickets, money, and other interactions. They were in their 20s,” the representative said.