Lindsey Graham Is So Confident In President Trump, He Is Donating A Half-Million Dollars Towards Donald’s Legal Battle 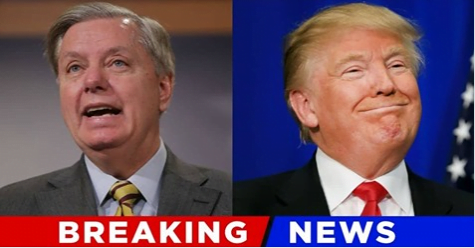 If Joe Biden is declared President of the United States, it seems likely that Donald Trump will dispute the results. The 2020 election is indeed one of the closest in history.

However, it’s not the tightness of the race that Trump has a problem with — he believes the integrity of the election was compromised in multiple states, and this will lead to a huge legal battle.

And when that happens, he’s going to get some help.

Several Republican leaders have vowed to stand by the President if Biden is declared the official winner. This includes Senate Judiciary Committee Chairman Lindsey Graham (R-SC).

Graham, who has often supported the President’s policies and stances in the past four years, knows Trump will need all the assistance he can get.

That’s why he’s dipping into his own funds to help the cause.

Senate Judiciary Committee Chairman Lindsey Graham (R-SC) announced late on Thursday night that he will be donating $500,000 to President Donald Trump’s re-election campaign as they gear up for a legal fight in the court system over election results in several states where the race is close.

As Graham told Sean Hannity, he’s standing by the President’s side, due in part to the fact that Trump stood by his.

Graham said specifically that Trump “helped Senate Republicans” and claims that the GOP flipped a few House seats “because of the campaign that President Trump won.”

The Senate leader further ripped the media’s inaccurate polling prior to the election:

Mainstream media polling is designed to suppress Republican votes. I won by 11, Susan [Collins] won by seven or eight [in Maine], Mitch [McConnell] won by 21 [in Kentucky].

It’s a game they play with their polling to depress the Republican vote.

The $500,000 is apparently coming out of Graham’s campaign account, according to the Associated Press. It’s definitely a good start but the President will probably need even more help.

Currently, Trump’s team is calling for more Republicans to support the President in his dispute over the election results.

For example, Donald Trump Jr. wrote this on Twitter:

The total lack of action from virtually all of the “2024 GOP hopefuls” is pretty amazing.

They have a perfect platform to show that they’re willing & able to fight but they will cower to the media mob instead.

Don’t worry @realDonaldTrump will fight & they can watch as usual!

Republicans and Conservatives across the nation have also called out GOP politicians for remaining quiet. In the eyes of many, now is the time to speak up and act.

Well, that’s exactly what Lindsey Graham has pledged to do. But will other Republican leaders follow suit?