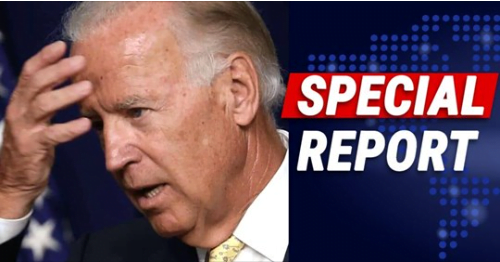 Joe Biden finally got out of the basement to do an interview… from his living room.

In a friendly interview with CNN, he struggled to finish his thoughts.

Anderson Cooper decided to step in and help the ailing Biden, prompting him.

But it seemed like Biden had to revert to an obvious script:

This is embarrassing for @AC360 – he just sits there and covers for Biden as he reads his points and struggles. https://t.co/uQLw6IoDgW

Anderson Cooper had the pleasure of watching Joe Biden sputter out of control as he tried to slam Donald Trump.

It was obvious that Biden was reading from some pre-written script, with talking points—trying to accuse Trump for all the COVID deaths in America.

(Apparently, the Democrat governors and mayors have no blame, nor does China—who let the disease loose.)

or try even ask him an original question. He just sits there, like a liberal lapdog, giving Biden time to figure out what he’s trying to say.

The best part, though, is when Biden actually calls Trump “incompetent.”

Wow. This guy can’t even finish his own statements off a script, yet he calls the president incompetent.

I wonder if Joe was able to catch Trump’s 70-minute long speech from last night?

Will Biden be able to give that kind of speech in this election? Could he even stay up late enough to listen to all of Trump’s speech?

The Democrats are running on a platform that’s entirely anti-Trump. They slam Trump over COVID but haven’t provided a single alternative solution to the problem.

They blame Trump for the disease, even though it’s China who is to blame.

Democrats especially ignore the many mistakes they made at the state and city level, as in New York and California’s disasters.

Perhaps Biden is better off not attacking Trump. Each time he does, Joe looks the worse for it.