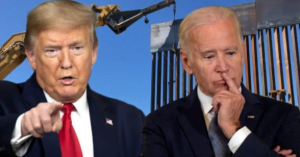 Who will end up in the White House next year is still a raging battle. But Joe Biden has made it clear that if he’s president, he will undo much of what Trump’s done for America.

Biden appears to be a fan of open borders. So naturally, he doesn’t like Trump’s big beautiful border wall.

Rumors swirl that a President Biden would immediately halt further construction on the wall. Too bad it won’t matter much:

The Department of Homeland Security (DHS) and U.S. Customs and Border Protection have been racing to fulfill the president’s promise of 450 miles of border wall before the end of 2020.

According to the CBP, 402 miles have been completed as of November 16…

“This wall saves American lives. Every single bit of concrete and steel that goes into the ground stops dangerous people and deadly drugs from coming into this country.”

According to reports, most of the 450 miles of border wall promised by the administration will be completed by the end of this year.

In fact, DHS and U.S. Customs are “racing” to get the wall finished, regardless of who is in the White House by 2021.

Democrats have opposed Trump’s promised to secure the southern border since day one. Not a single Democrat in Congress supported the wall—and even blocked attempts at funding it.

In fact, it appears liberal activists were behind the migration crisis of 2018—an attempt to overwhelm the border before the wall could be finished.

If Joe Biden becomes president, that’s the end of the border wall. He will try to enact open border policies that will see countless migrants flood the country.

That includes criminals and drug runners.

But with much of the border wall already up, there is little Democrats like Biden can do about it. And if the DHS can finish the 450 miles by January, the country will be that much more secure.