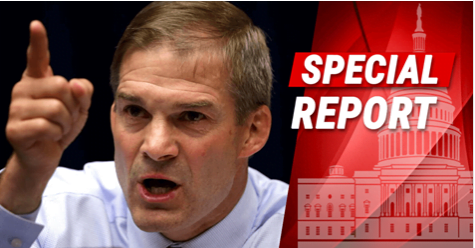 Big news has been coming out today over the 2020 Election. Even though the media has “called” it for Biden weeks ago, it’s far from over.

President Trump’s legal team has launched numerous lawsuits. Many of them will end up in the Supreme Court—whose rulings will have a big impact on this election.

But that’s not all. Republican congressman Jim Jordan is not at all happy at what he’s seen this election.

And he’s leaving nothing to chance as he calls for Congress to do their job on this one:

The top Republicans on the House Judiciary and Oversight Committees on Wednesday demanded that Committee Chairs Jerrold Nadler and Carolyn Maloney launch congressional investigations into alleged “errors and misconduct” surrounding the 2020 presidential election, and called for them to hold hearings “immediately.”

Jim Jordan is calling on Congress to immediately launch investigations into the growing evidence of problems with the 2020 election.

Plenty of accounts of “irregularities” and other problems and glitches have shaken Americans’ faith in this election. President Trump has even said that if only the legal votes are counted, he’d win—suggesting many illegal votes have been cast this year.

Instead of cowering to the media mob, the Republican Party is behind Trump in his fight for a fair and legal election.

But it’s uncertain whether Congress will heed Jordan’s calls for an investigation. Those in charge of these committees include Jerry Nadler, the far-left Democrat who helped lead the bogus impeachment.

Democrats in charge of important congressional committees will most likely ignore demands to investigate. Even though this situation affects all of us and our democracy, they will do nothing.

Perhaps Republicans in the Senate will take up the call to investigate this election and perhaps reveal more evidence of wrongdoing.

But that remains to be seen.

Do you think Trump still has a chance to win?