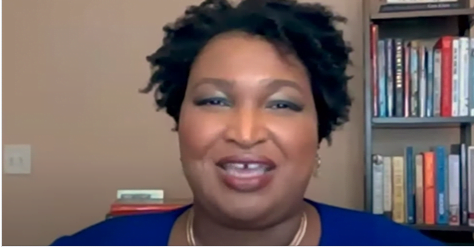 In a new Op-Ed for USA Today, author and commentary editor Jill Lawrence suggests Stacey Abrams would be a great DNC chair “if she could be talked into it.”

Abrams was very vocal about her interest in being Joe Biden’s running mate.

Another name mentioned frequently as a potential DNC chair to replace Tom Perez is Jaime Harrison, who lost his SC Senate Race to Lindsey Graham but proved to be a fundraising powerhouse.

“You have to give Stacey Abrams credit. She has been the architect of the new Democratic coalition in Georgia,” former House Speaker Newt Gingrich, himself no slouch at realigning politics, told the Washington Post. That’s true whether Georgia Democrats Raphael Warnock and Jon Ossoff win or lose those Senate runoffs, and it’s true well beyond Georgia. Through her voting rights group, Fair Fight, Abrams was a force this year in battleground states across the country.

Wisconsin Democratic Party chair Ben Wikler told me the group distributed packets to every swing-state party director at an August 2019 meeting. They described how Fair Fight could help with everything from voter protection to money to teaching people how to fill out mail ballots and make sure they didn’t get thrown out. And then the group followed up in the most useful way possible — working through state parties instead of outside or beside them. That strengthened party infrastructure and voter protection programs that eventually helped Biden, the Democratic nominee.

“She has started something here that could easily translate into the DNC,” Michigan party chair Lavora Barnes said of Abrams. But while she’d clearly be an asset there, Barnes added, “I’d want Stacey to do whatever she wants to do,” including run for governor or senator.