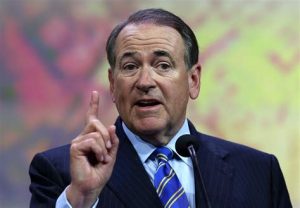 Donald Trump was impeached for a second time only days before he leaves office. For doing what, exactly?

Democrats say he “incited an insurrection.” That’s some strong language, huh? Many pointed out Trump’s speech on January 6 did not tell anyone to commit violence. Nor did the Democrats hold investigations to produce evidence.

Looks like they are holding him guilty, without due process.

I guess the left thinks he would read into what pols say and hold them accountable for anything.

Mike Huckabee thinks, if that’s the case, then we should have the same standard for both parties. That would put Kamala in deep trouble.

Are you a proud supporter of President Trump? If so, you’ll LOVE this President Donald Trump Collectable Coin. This unique keepsake is a great way to honor the Presidency of the man devoted to “Make America Great Again!”

Former Arkansas Gov. Mike Huckabee says that if all politicians who are ever linked to rioting are to be removed from office, it might be time to start with Vice President-elect Kamala Harris…

“If we’re going to impeach Donald Trump for what he said, then we’d better impeach Kamala Harris for saying the things she did last summer about the rioters and looters — and even establishing a monetary fund to get them out of jail on bail so they could get back to the riots,” Huckabee said.

Huckabee pointed out how Kamala Harris appeared to support rioters and looters during the Summer of 2020 (as did many other Democrats). She also started a fund to bail them out—so they could go on and continue what they were doing.

It seems like Harris was doing just as much to encourage lawlessness as Trump, doesn’t she?  D.C. was hit with riots on numerous occasions over the summer of 2020 following her comments.

Not one Democrat faced impeachment or prosecution over it. Yet now, Democrats want to run Trump out on a rail over what they claim he “incited” from just one speech.

If we used the same standard, as Huckabee says, Harris and many others would face serious consequences.

That’s the big problem of attacking someone over speech. Unless they specifically order someone to break the law, can we really prove they are “inciting” anything?

Democrats seem to think so, at least whenever Republicans say anything.

We are not suggesting Harris should be impeached—we’re suggesting that one fair standard for all Americans and all their representatives should be used. Right now it looks like there is a double standard in America. One for Republicans and one for Democrats.

Do you think there is a double standard?