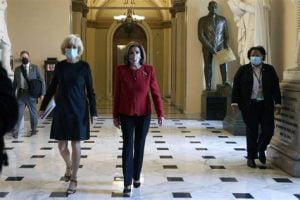 Democrats are still pushing to “get” Donald Trump. They failed to remove him from office through impeachment.

But even if he ends up the loser of this election (and we’re not calling it yet like most of the media), they’re not done with him yet.

Democrats, led by Nancy Pelosi in the House, ran bogus investigations and an impeachment probe based on questionable evidence that fell apart and cost the American people over $30 million.

But if he does leave office on January 20, it looks like they plan to use what power they have to punish him even in private life.

And a new document seems to make that clear:

In the surest sign that House Democrats plan a wave of investigations into the Trump administration, leading committee chairs have sent a letter to more than 50 agencies warning that all documents and texts, even on private phones, be preserved…

For good measure, it included a jail threat. “Any employee who conceals, destroys, or attempts to conceal or destroy a federal record may be subject to fine and imprisonment for up to three years,” said the letter to 53 agencies.

What was the thanks he got from House Democrats? Endless investigations and impeachment.

Many of those Democrats still claim Trump “colluded” with Russia—despite a 2+ yearlong investigation disproving that.

What do they seek to find if he leaves office? Are they so petty that they want to get the man, even if Biden becomes president?

This suggests it was never about protecting our country, but just a vendetta by Democrats against Trump.

Should Biden become president, House Democrats would be busy working with his administration. Would they really have time to go over Trump admin documents with a fine-tooth comb?

Or perhaps they think Trump will get a second term and this is more “insurance”?

These leftists threaten agencies with jail time if they destroy documents, even though it is required by law to preserve them.

Funny how these same Democrats weren’t upset when Hillary Clinton and her staff destroyed thousands of documents and even smashed up phones.

But I guess it only matters when Republicans do it, huh?