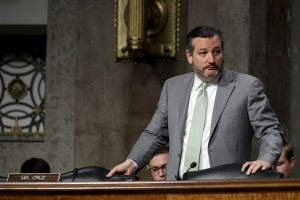 After over a month of Trump battling the media, the Democrats, and the establishment, Republicans in Congress are finally getting his back.

Conservative lawmakers in both the House and Senate are speaking up—refusing to vote to certify the electoral college results. Some are taking it even further, like Ted Cruz.

The Texas senator, along with eleven other colleagues, is calling for an audit of election results for states at the center of the ongoing battle.

He vowed he would not certify this election unless this was conducted. So, Democrats fired back with a shocking response. From The Hill:

Sen. Ted Cruz (R-Texas) on Sunday called for critics of his challenge to the results of the presidential election to “tone down the rhetoric.”

Cruz criticized “hyperbole” and “angry language” in response to his statement Saturday, accusing Democrats of “urging that I should be arrested and tried for sedition and treason.”

“That’s not helpful … at a time when we’re pitted against each other. Just relax, and let’s do our jobs,” he said. “We have a responsibility to follow the law.”

Democrats quickly attacked Cruz for demanding an emergency audit of the election results from several states. Some leftist lawmakers went as far as to call for the arrest of Cruz—and for him to be charged with “sedition and treason.”

That is quite the response, from people who claim the election was won fair and square and that there’s not a trace of problems with how the vote was counted.

You’d think that if Democrats were truly confident in the results of the 2020 election, they’d have no problem with an audit and legitimate challenge, right?

After all, if there’s no fire, there’s no smoke. That’s what they said when they spearheaded a 2+ year investigation against Trump over Russia (they found nothing in that one, by the way).

Yet today, they are actually going after Cruz and his support for election transparency and integrity.

Cruz, for his part, urged lawmakers to “tone down the rhetoric.” After all, nobody is going to arrest Cruz for doing his job; they are just lashing out—perhaps out of fear of what might be discovered.

The Republican called on all members of Congress to do their jobs. That must be hard for Democrats, since they don’t seem to know how to do that.

Do you want a new audit on the 2020 election? The answer seems pretty clear.