‘I hear you’: People amazed at Trump’s notes for school shooting listening session 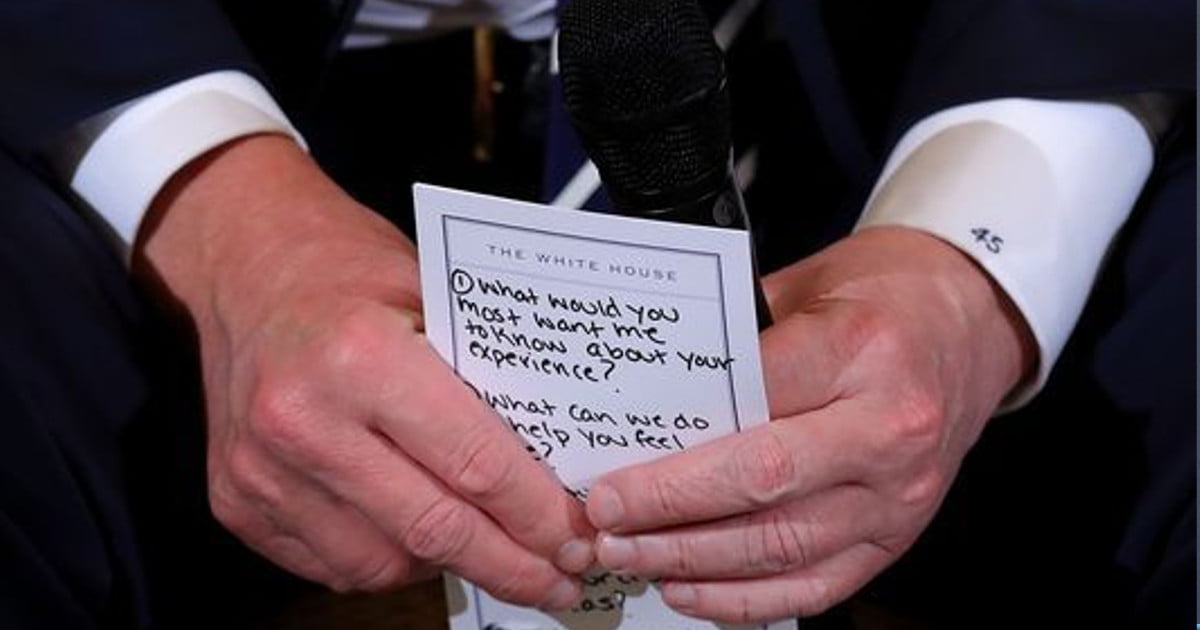 Amid the grief expressed during President Trump’s listening session with school shooting survivors on Wednesday, it was the white placard in his hands that, for some, stood out the most.

The president held what appeared to be questions and perhaps a planned response to six students of Marjory Stoneman Douglas High School, where a gunman killed 17 people on Feb. 14.

The notes, on White House letterhead, were captured by Getty photographer Chip Somodevilla. Organized in five points, they began with a question: “What would you most want me to know about your experience?”

No. 2 is covered partially by the president’s hand, but begins, “What can we do…” and finally, the one most mentioned online, is No. 5, which simply said: “I hear you.”

BREAKING: When meeting with public/constituents, politicians often use notes prepared by staff. I mean, seriously, folks. This is one of the more normal things Donald Trump has done. Not a big deal. https://t.co/DymefUTsi9

Since when do we need written reminders to show how much we care? Scripted emotions are fake. Sad! https://t.co/SuBRs9mCvb

Trump’s notes seem fine. Having “45” stitched onto his cuffs is deranged.

The students were joined by their parents as well as family members of victims killed in the 1999 shooting at Colorado’s Columbine High School and the 2012 killings at Sandy Hook Elementary in Connecticut.

During the meeting, Trump hinted he may consider stricter gun control measures, including stronger background check for gun purchases, changing the minimum age to buy assault rifles from 18 to 21 and instituting more active shooter drills.

“It’s not going to be talk like it has been in the past. It’s been going on too long. Too many instances, and we’re going to get it done,” Trump said during the session.

The president plans on holding more talks about guns in schools, he tweeted Thursday morning.

Will be meeting with Lawmakers today at 11:30 A.M. to discuss School Safety. Next week it will be with our Nation’s Governors. It’s been many years of all talk, no action. We’ll get it done!