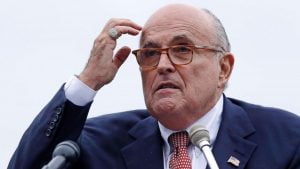 A defamation law firm representing Dominion Voting Systems has sent letters to White House counsel Pat Cipollone and President Donald Trump’s personal attorney Rudy Giuliani instructing them to preserve all records related to the company at the center of Trump’s conspiracy theories and warning Giuliani that legal action is “imminent.”

Through two well-known defamation attorneys, Dominion Voting Systems sent letters to Cipollone and Giuliani Tuesday, demanding Giuliani stop making “defamatory claims against Dominion” and ensure there is “no confusion about your obligation to preserve and retain all documents relating to Dominion and your smear campaign against the company.” The attorneys told Cipollone their preservation request is vast and includes conversations White House officials had with attorneys like Giuliani or Sidney Powell regarding Dominion.
Since he lost the election, Trump, his attorneys and his supporters have baselessly alleged that machines made by the voting machine manufacturer were manipulated to change votes from Trump to President-elect Joe Biden or delete votes for Trump. Dominion’s CEO has defended the company’s work repeatedly, and now appears prepared to take legal action against those in the President’s inner circle.
There is no evidence that the 2020 election was stolen from Trump, and his administration and election officials have called it the “most secure” election in US history. Biden won the popular vote by more than 7 million votes and the electoral map 306 to 232.
Dominion is being represented by Tom Clare and Megan Meier from Clare Locke LLP, a law firm that specializes in defamation cases. In the letter to Giuliani, which was shown to CNN, the attorneys caution Giuliani that “litigation regarding these issues is imminent.”
“With this letter you are on notice of your ongoing obligations to preserve documents related to Dominion’s claims for defamation based on allegations that the company acted improperly during the November 2020 presidential election and somehow rigged the election in favor of President-Elect Joe Biden,” the letter to Giuliani reads.
Trump’s personal attorney must adhere to the preservation request as well as his “principals, agents, employees, partners, associates, paralegals, and subcontractors under your supervision.” That also includes contact they had with Trump campaign staffers, Powell, Jenna Ellis and Lin Wood.
The letter to Cipollone similarly says that any communications between Trump and any White House employee with Powell, Giuliani, Ellis or Wood must also be retained.
Giuliani and the White House counsel’s office did not immediately respond to requests for comment.
On Tuesday, a Dominion executive separately sued the Trump campaign and conservative media figures claiming defamation.
Last week, CNN reported that Trump’s campaign legal team sent a memo to dozens of staffers instructing them to preserve all documents related to Dominion Voting Systems and Powell in anticipation of potential litigation by the company against the pro-Trump attorney. Dominion Voting Systems also sent a letter to Powell recently demanding she retract her “wild, knowingly baseless and false accusations” about the company.
Among Powell’s claims were allegations that Dominion machines were made in Venezuela to help the country’s president, Hugo Chavez, win elections. Chavez died in 2013.
Though some of his allies have tried to distance themselves from her, Trump has invited Powell to the White House multiple times and discussed naming her as a special counsel to investigate his claims of voter fraud, which his attorney general said he looked into and did not find widespread evidence of fraud that would change the election outcome. But in recent days, as it became clearer that legal action was likely, Giuliani has sought to once again attempt to distance himself and his client from Powell.
“She is not a special counsel for the president, she does not speak for the president, nor does she speak for the administration. She speaks for herself,” Giuliani told Newsmax recently.
Source: CNN
Share on Facebook Share
Share on TwitterTweet
Share on Pinterest Share
Share on LinkedIn Share
Share on Digg Share