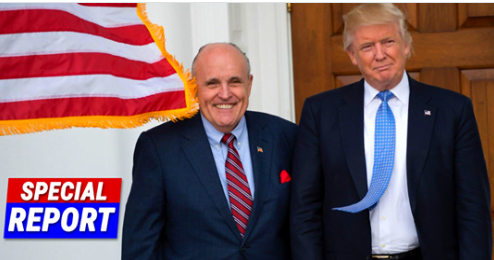 The media continues to push against the idea that the 2020 Election is not certified yet. They seem to want Trump and conservatives to just give up.

But from all appearances, this battle seems like its only just getting started. The president promised to bring challenges to what he and others are calling problems in the election counting.

Trump’s legal team has been hard at work for weeks. That includes his lawyer, former New York mayor Rudy Giuliani.

You might be wondering what the status is on all these battles? Well, Rudy himself has given up an update. It appears Team Trump is trying to take this all the way to the Supreme Court!
Giuliani updated Americans on the status of their lawsuits over the 2020 Election.

He said they already have two established vehicles “ready to go to the Supreme Court.”

He also went on to discuss possibly even more cases ready very shortly revolving around what happened in Michigan, Wisconsin, and others.

Among the legal team demands, they want the court to halt the ballot count until there is “meaningful transparency.” The case also accuses Pennsylvania’s secretary of state of extending the deadline for first-time voters to provide proof of ID.

ts of ballots being entered into the count when Republicans were unable to watch the process–creating the suspicions of fraud.

Rudy appears to be pointing to several accounts from various states where people believe fraud occurred. In some cases, voting results were altered due to an alleged human error with the machine, causing a glitch and sparking even more concerns about the election results.

For months, Trump warned about widespread voter fraud— Of course, the media disregarded his concerns.

Really? If there is nothing wrong with the election, why fight to have it fully investigated so we can know for sure?

But the concerted effort by liberal media organizations seems to suggest otherwise. It’s possible they are afraid of what Trump and his legal team might reveal in these cases before the Supreme Court.

Much might be decided by the justices in the coming weeks, with rulings that might determine the presidency itself.

Hopefully, Giuliani and his team have all the facts on their side.