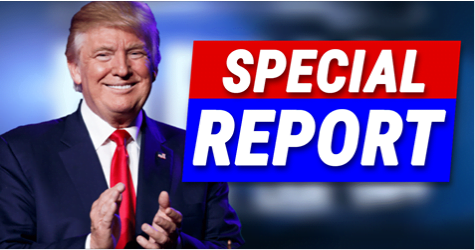 Though President Donald Trump isn’t yet out of the hospital, he’s still connecting with the American people. In fact, while he’s being treated for the coronavirus, he continues to tweet.

This morning, the President unleashed a series of tweets (most in all-caps) — one message begged citizens to vote in November, while others were a little more cryptic.

However, a few were crystal clear, and quite powerful:

In one strong tweet, he said that if the country decides to go with Joe Biden, America will face a huge tax increase. “The biggest” the nation has ever seen, in fact:

IF YOU WANT A MASSIVE TAX INCREASE, THE BIGGEST IN THE HISTORY OF OUR COUNTRY (AND ONE THAT WILL SHUT OUR ECONOMY AND JOBS DOWN), VOTE DEMOCRAT!!!

But in a separate message, Trump said he would do the exact opposite.

Instead of raising taxes, he will cut taxes and he even teased a particularly large one on the horizon:

BIGGEST TAX CUT EVER, AND ANOTHER ONE COMING. VOTE!

During his tenure, the President has passed the Tax Cuts and Jobs Act in 2017, which was the biggest overhaul to the tax code since Reagan.

Since that time, POTUS has often hinted at yet another round of cuts, which he has dubbed “Tax Cuts 2.0.” Presumably, he’s referring to this in the above tweet.

Trump didn’t offer any details on the plan but again, he has mentioned possible moves in the past.

For example, he might forgive temporarily deferred payroll taxes, offer tax breaks to U.S. companies (to encourage them to bring jobs back from overseas), and drop the capital gains tax rate from 20 percent to 15.

As for Trump’s opponent on the campaign trail, he’s specifically targeting the wealthy.

Biden intends to tax wealthy households; specifically, those earning over 400,000/year and corporations. This would include higher income tax rates, new tax credits, and fewer deductions.

The economy and taxes remain hot topics of conversation in 2020, and will undoubtedly play a major role in the upcoming election.

The question is, which candidate offers a more attractive tax plan for the country?

Democrats claim Biden’s plan should appeal to the “everyday joe” but Republicans are saying that’s just a facade, and just about everyone will end up paying higher taxes.

The claims will continue to fly in the coming weeks, that’s for sure.