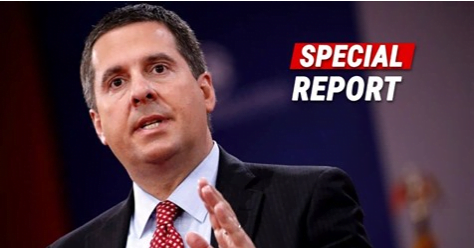 We have been waiting for months—years really—to see the results of Barr and Durham’s investigation of the Russia probe.

The government, on Obama’s watch, seems to have spied on the Trump campaign and his transition team in 2016. All over a bogus dossier that has been shown to be unverifiable.

Many hoped the DOJ would reveal the truth before this year’s election. But we are still waiting for information.

And with very few indictments coming out, Devin Nunes is worried that this investigation might get shut down. So, he’s demanding they pull out the big guns:

Republican California Rep. Devin Nunes said Sunday that a special counsel needs to be appointed to help ensure the Durham investigation is concluded and not swept under the carpet.

“Every day that ticks by it’s going to become an absolute necessity that a special counsel is appointed on the way out,” Nunes told Fox News’ “Sunday Morning Futures.”

It seems Devin Nunes isn’t confident Trump’s team can secure the integrity of the 2020 Election. He fears that Joe Biden will become president and shut down Durham’s probe.

(After all, Biden could be implicated, as he was vice president during the start of the Russian probe.)

Nunes thinks that a special counsel would have a certain amount of mobility the regular U.S. attorneys wouldn’t. Although Joe Biden could still shut that down, it’s a little less likely.

The fact remains that if Joe Biden does become president, all bets are off. It’s hard to imagine Joe would let this investigation continue—if not out of a desire to protect himself and perhaps many people who will return to the White House under his administration.

Durham’s investigation turned into a criminal probe soon after it began. Which means, that if he gets the evidence, it might lead to indictments and jail time for those convicted.

But without any tangible news in recent months, Nunes fears nothing will come from the long hours of investigation.

A special counsel might be the answer, but that’s yet to be seen.

Do you want a Special Counsel appointed for the Durham investigation?