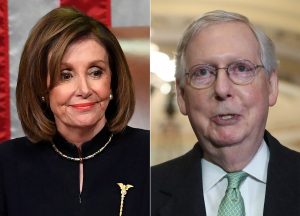 Nancy Pelosi has been rushing impeachment so they can get Trump convicted, removed, and most importantly, vote to never let him run for office again.

But just today he made a major move that’s signaling very different intentions. Ones Nancy will not like. From The Daily Wire:

TRUMP SUPPORTERS: See How to Claim this Trump Collectible

Senate Majority Leader Mitch McConnell has rejected a plan to reconvene the Senate in an emergency session to hold trial over an impeachment article against President Trump in the House.

Without the emergency session, the Senate is due back in session on Jan. 19., so McConnell’s decision all but kills a Democrat-led effort to oust Trump from office before his term is up and President-elect Joe Biden is sworn in on Jan. 20. A trial over the impeachment article is unlikely to conclude within such a short time.

Mitch McConnell has clearly signaled he does not want President Trump removed from office before the end of his term. Because there will be no emergency session, the Senate will wait to convene until January 19th, the day before Biden’s inauguration.

There seems to be no way to conduct a Senate trial with not even a day left on the clock, and so at the very least, the Senate would have to wait to have their trial until after the inauguration.

This would have at least two significant effects. First, it would be a significant distraction from the first days of Biden’s presidency. Joe has claimed he does not want this, as he has a list of priorities to accomplish quickly.

That said, it’s possible Democrats would actually welcome a distraction in the form of a Trump impeachment to keep people’s eye off what Biden will be doing.

But it will definitely tie the Senate’s hands in case Biden was hoping to push through any new legislation—including new stimulus checks.

The other major effect? It raises the question of whether the Senate is Constitutionally allowed to connect a President in an impeachment trial if he is no longer the President. Pelosi and her party are pushing for a conviction that includes the punishment of not being able to run again for political office.

It seems like they are worried a second term for Donald Trump is a real possibility they want to legally squash.

But Constitutional experts such as Alan Dershowitz have already warned that an impeachment after Trump has left office would be highly questionable. In his case, Dershowitz was questioning the suggestion to wait until after Biden’s first 100 days to conduct an impeachment hearing.

In this case, if the Democrat-led House rushes an impeachment, is there still a need, or a Constitutional allowance, for the Senate to convict and punish?

Clearly, there is still much to discuss, as we have entered historic territory that no other President or Congress has ever seen.

Maybe Democrats should start to consider other routes that will not divide the country further and instead unite. Some Republicans are suggesting a censure would be appropriate, as very few Republicans believe Trump should be removed for anything he has said or done.

Do you think the impeachment push should continue?