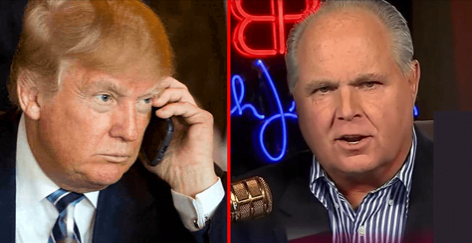 President Trump is still fighting the Democrats in the courts and has not conceded yet, but there are other things that should still be on his mind as President.

Such as holding onto the Senate for the next two years. In order to do that, Republicans need to win at least one of the Georgia runoff seats on January 5th (and preferably both).

Democrats are trying to rally around these races and nationalize them, and they are pouring in millions of dollars to try to take them.

Rush Limbaugh is watching the situation closely, and he had a big suggestion for how Trump could be a big help. From rushlimbaugh.com:

RUSH: I don’t know about you, but I’d kind of like to see President Trump in Georgia. I’d like to see some rallies. I’m not alone in this.

So, those two Senate races, Perdue, Loeffler, they’re really crucial, and I think Trump is still the Republican Party. He’s still MAGA. He could still go down there and do some rallies and secure those two Senate seats. I don’t mean yesterday or today. But the runoffs, the elections are on June the 5th. So, time is of the essence.

So Rush really wants Trump to get down there. If these really are Trump’s final months if office (and many are hoping he pulls off a 2nd term), it would be quite a legacy to hold the Democrats off from most of their progressive agenda, including ending the filibuster and packing the Supreme Court.

Well, it didn’t take long for Trump to respond:

BREAKING: Trump to hold rally in Georgia on Saturday pic.twitter.com/iohivJHI2U

So from Trump’s own mouth, he’s going down there, and soon. There was some confusion about which Saturday he’ll be there. So the White House quickly clarified:

White House clarifies just now that “when the President said he would be going to Georgia on Saturday, he means Saturday, Dec. 5, not this Saturday.”

The media has tried to portray Trump as angrily sulking in the White House or on the golf course as the court cases continue. But that doesn’t seem to be the case if you look at his schedule.

Trump is still working on major drug price reductions. He’s still holding public events, such as for Thanksgiving, and now he’s going to hold rallies to help the Georgia Senators.

Sounds like something the media should acknowledge, and supporters should thank him for—right?