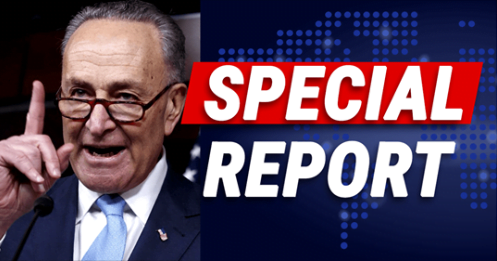 As we get closer to Election Day in November, Democrats are tipping their hand to their plans.

If they win the election, they plan on ramming through their agenda—regardless of what Americans want.

Liberals have promised to eliminate the filibuster—which would invalidate the minority party in the Senate.

They want to pack the Supreme Court with as many justices as it takes to make a liberal majority.

And they want to find other new ways of expanding their power.

Senate Minority Leader Chuck Schumer said “everything is on the table” if Democrats win a majority of the Senate, including making Puerto Rico and Washington, DC, states.

Now, more than ever, is it important for conservatives to show up at the polls.

Because if Democrats get even an inch of power in the Senate, all bets are off.

Schumer claimed to want to force through anything and everything, if Democrats win back a majority in Congress.

That includes trying to turn one city—Washington, D.C.—into an entire state. Not to mention making Puerto Rico (whose citizens have not approved it yet) another state.

That would give Democrats even more power, likely including four more senators.

Removing the filibuster would only give the majority party any in the Senate—the minority party would have next to no ability to stop or slow down the majority.

This, from a party who says they care about minority voices.

Just recently, Obama condemned the filibuster as a “Jim Crow” relic. Yet they continue to use it when they need to block Republican legislation.

Is Schumer admitting we’re right? He said that if he becomes Majority Leader, he intends to make significant change happen.

How many Americans want the SCOTUS packed with far-left justices, radical changes to Senate rules, or major changes to our government to cement one-party rule?

Perhaps Democrats are more concerned with their best interests in mind?