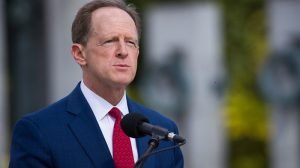 “I do think the president committed impeachable offenses. But I don’t know what is going to land on the Senate floor, if anything,” Toomey, a member of the Senate Banking Committee, said in a Jan. 9 interview on Fox News.

Toomey, who isn’t seeking reelection in 2022, isn’t the first Republican to speak against the president in the aftermath of the breach of the U.S. Capitol. Sen. Ben Sasse (R-Neb.) said he would “definitely consider” any impeachment articles brought against Trump, while Sen. Lisa Murkowski (R-Alaska) called on the president to resign.

House Speaker Nancy Pelosi (D-Calif.) urged her Democratic caucus in a letter on Jan. 8 to return to Washington as she appears poised to have the Democrats move forward with impeaching President Donald Trump for a second time.

Pelosi and a number of prominent Democrats allege that Trump incited the protesters who breached the U.S. Capitol. In a speech to a massive crowd of supporters that day, the president asked them to march to protest near the Capitol and “to peacefully and patriotically make your voices heard.”

The president didn’t say anything about breaking into the building.

The breach interrupted a joint session of Congress that was convened to count the Electoral College votes. After the building was secured, the session concluded with the certification of former Vice President Joe Biden as president-elect. A group of eight senators and 140 House members objected to the counting of one or more slates of electors who cast their votes for Biden.

During the joint session, Toomey argued on behalf of counting Biden’s electors from Pennsylvania, saying that the objection would “overturn the results of the presidential election.”

“Even if Congress did have the Constitutional responsibility to judge the worthiness of a state’s election process, which it does not, rejecting Pennsylvania’s electoral votes would still be wildly out of proportion to the purported offenses and very damaging to our republic,” Toomey said in a speech on the Senate floor.

The White House didn’t immediately respond to a request for comment.

Trump’s term in office concludes at noon on Jan. 20.

Should a House impeachment vote succeed, the move would send the articles of impeachment to the Senate, where the concurrence of two-thirds of the senators present would be required to convict and remove the president.

If convicted, the president would be barred from holding federal office.