BREAKING BIG: Georgia State Senators Call on Pence to Delay Jan. 6 Electoral Vote Because of This 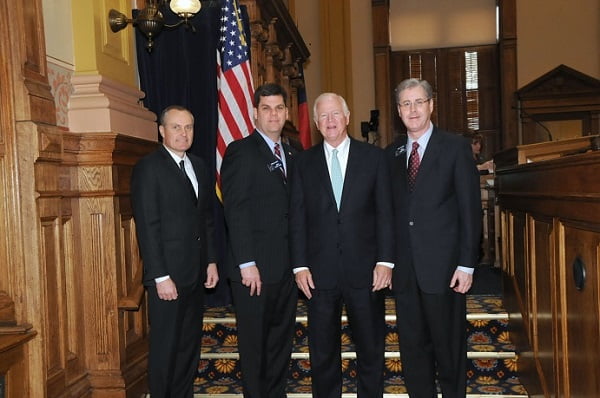 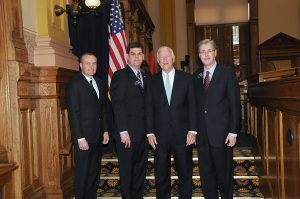 Republican state senators in Georgia started a push on Monday to delay the Jan. 6 counting of electoral votes. At least a dozen have signed a letter directed to Vice President Mike Pence asking him to officially delay the count—and the number is still growing.

“There’s about 16 or 18 of us now that signed this letter to the Vice President … asking him to delay the electoral vote for 10 to 12 days,” Sen. Brandon Beach told The Epoch Times.

“We were going to get it to him tomorrow morning,” Beach said, adding that more Senators might still sign on.

Beach says that he is concerned about the integrity of the election. “People are saying yeah there is something here, there’s something that just doesn’t pass the smell test—that there was some irregularities, there was some impropriety going on in the voting process,” he said.

Ballots and voting machines need to be forensically audited, especially in Fulton county, said Beach. The biggest concerns he has relate to the State Farm Arena’s vote-tabulation center in Atlanta. It appears that a state election monitor was absent for a part of the counting process and that Republican poll watchers were led to believe the counting was over when it in fact wasn’t.

Coincidentally, Jenna Ellis, a senior legal adviser to the Trump campaign and one of Trump’s campaign attorney suggested on Monday that Pence delay certifying the votes on Jan. 6 and instead ask legislatures in the six contested states to clarify which candidate’s slate of electors should be approved.

“What Mike Pence could do, and what he should do, in fact, is to direct a question back to the state legislatures when there are two competing slates of delegates from these six states.

“He can ask that question to the states and say, ‘Well, state legislators, you know, I have an oath to the Constitution to uphold the Constitution as written in Article II Section 1.2, which says the state legislatures direct the manner in which electoral delegates are selected, so you tell me which of these two slates was selected in the manner that your state general assembly has designated,’” Ellis told Just the News television show The Water Cooler.

When Beach was asked if they had discussed anything relating to certifying the state’s electoral votes, he said: “If the Vice President is able to take our letters to postpone, then we would be in session and we could discuss what we could maybe do as a state senate in a state house.

“Right now, we can’t do anything because we’re not in session,” he added.

Georgia’s governor Brian Kemp previously refused to call a special session to consider claims of election fraud and other irregularities.

Other state senators in Georgia, including Beach, recognize it is highly unlikely for a special session to be called in the state as things stand now.

“Since Congress meets Wednesday regarding the electoral college vote, a special session before they meet is not an option,” state Senator Kay Kirkpatrick told The Epoch Times via email. “But I will continue to fight for the truth.”

“I am working every day to get to the facts of any and all fraud reports,” she added. “It is critical that we can trust our election system. I have been dividing my time between looking into all aspects of the Nov. 3 election and trying to get our two U.S. Senators re-elected.”

Beach said he and other senators called for the delay so they “can continue to have more time to investigate and scan these ballots.” The senator said he also wrote an individual letter to Pence as a member of the state’s judiciary subcommittee.

State senators in other states have also started a similar push, according to Beach.

“I think several senators from Pennsylvania, Wisconsin, and Arizona also wrote letters sent to the Vice President, [telling him] we want the vice president to at least delay it 10 to 12 days.”

Under the Constitution, Jan. 20 is the date where officially, “The terms of the President and the Vice President shall end … of the years in which such terms would have ended if this article had not been ratified; and the terms of their successors shall then begin.”

Beach said he is doing all of this because he wants to get to the bottom of it.

“I’ve had my cell phone on my website and on my senate sites for eight years, I have never received any calls,” he said. “I may have gotten a call here now and then but after this—my phone has blown up, my email has blown up, my text messages have blown up.”

“People are angry, they’re mad, they feel disenfranchised,” he added.