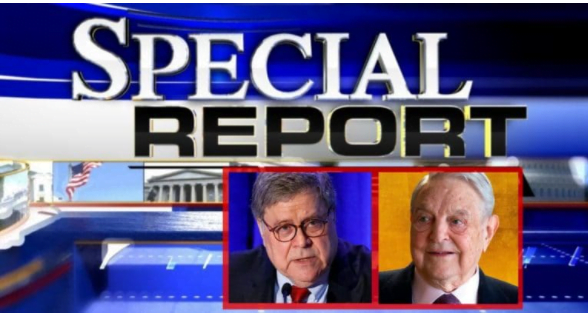 Soros thought no one would find out – but Barr got him!

President Trump has commissioned our attorney general, Bill Barr, to clean up Washington and American politics as a whole.

Barr is in the process of getting to the bottom of who spied on Trump during 2016. His bulldog is closing in on a criminal case.

In the meantime, he’s also going after George Soros. The billionaire has been involved in American politics for far too long.

And Barr’s discovered Soros is targetting American cities. His goal?

The destruction of our law and order.

From The Federalist Papers:

“They are following policies that are ultimately going to lead to an increase in violent crime and more victims,” he said.

Bill Barr has found out that Soros is getting officials elected who have a history of not supporting the police.

These officials then push policies that weaken the police’s ability to fight crime.

What we have seen as a result is an increase of crime in major Democrat cities across the country.

Haven’t you ever wondered why cities with Democrat leaders always have the worst crime?

It isn’t a coincidence that the Democrats who run these cities are wildly anti-police.

They make as many excuses as they want. But in the end, these liberals push policies that make it harder for cops to do their jobs.

They slash police budgets so that there are fewer cops on the streets. As a result, crime has gone way up.

Why would Soros and the Democrats want to do this?

But we do know that cities struggling with crime often fall victim to socialist policies.

Poverty increases and people are more willing to give up their freedoms. Government only balloons bigger.

Cities that are tough on crime-and embrace the 2nd Amendment–are also cities that reject far-left politics.

So, you could say crime and socialism go hand in hand.

This went on for years, under Obama. But only now is Trump’s AG exposing this scheme. Hopefully, he can bring it to an end.

SHARE if you support William Barr and our police, not George Soros!